What Should You Know About Blood Disorders in Women?

While bleeding and clotting disorders affect men and women, these conditions pose unique problems for women because of the impact the disorders can have on their reproductive health and quality of life. Current data estimate that as many as 1% of women in the United States may have a bleeding disorder and many are unaware of their condition.

Meet three women and hear about their experiences living with von Willebrand Disease (VWD). Learn about the signs and symptoms of VWD and why it’s important to seek help with any questions or concerns about abnormal bleeding. 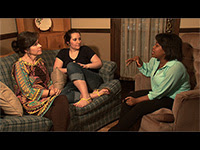 Watch the video »
The most common bleeding disorder affecting women is von Willebrand disease (VWD), which results from a deficiency or defect in the body’s ability to produce a certain protein that helps blood clot. Although VWD occurs in men and women equally, women are more likely to notice the symptoms because of heavy or abnormal bleeding during their menstrual periods and after childbirth. VWD and other blood disorders may also cause women to experience recurrent fetal loss, heavy bleeding during dental procedures, frequent nosebleeds, and heavy bleeding during or after surgery.
Women with heavy menstrual bleeding (menorrhagia) or VWD are at increased risk for anemia, pain during menstruation, hospitalizations, blood transfusions, limitations in daily activities, time lost from work or school, and a reduced quality of life.
In addition to VWD, other rare bleeding disorders and more common platelet function disorders may also be responsible for bleeding symptoms in women.
Although there are no cures for bleeding disorders, treatment is available to control symptoms and help women avoid complications and invasive procedures.