For the past few years, CDC has used a model to estimate the impact of annual influenza vaccinations. New data on estimates of flu illness, medical visits, and hospitalizations prevented by the 2015-2016 flu vaccines will be released, as well as a new range for deaths attributed to flu. 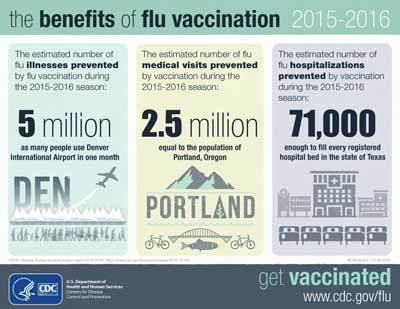 This web page provides estimates on the impact of annual influenza vaccination and the burden of influenza in the United States for the 2015-2016 influenza season, and will be updated annually.
For the past several years, CDC has used a model to estimate the numbers of influenza illnesses, medical visits, and hospitalizations, and the impact of influenza vaccination on these numbers in the United States (1-5). The methods used to calculate the estimates have been described previously (1,2) and are outlined briefly below. CDC uses the estimates of the burden of influenza in the population and the impact of influenza vaccination in influenza-related communications. Annual estimates on the number of influenza-related illnesses, medical visits, and hospitalizations, will be used to derive a five-year range to characterize the influenza burden in the United States. This range will be updated every five years.
Additionally, this web page provides estimates of influenza deaths and deaths averted by influenza vaccination. CDC calculates estimated influenza deaths in two ways: 1) using reports of pneumonia & influenza (P&I) deaths and 2) using reports of respiratory & circulatory (R&C) deaths attributable to influenza. P&I deaths are now available in real-time, while data on R&C deaths are available after a three-year delay. While both estimates are useful, P&I deaths represent only a fraction of the total number of deaths from influenza because they do not capture the deaths that occurred among people not tested for influenza or deaths that result from respiratory and cardiovascular complications. Calculations based on R&C deaths are used in CDC influenza-related communications materials because these calculations provide a more complete estimate of the actual burden of influenza. CDC will continue to present the mortality burden of influenza as a range, rather than a median or average, to better reflect the variability of influenza and will update estimates of R&C deaths as the data become available.

Influenza vaccination during the 2015-2016 influenza season prevented an estimated 5.1 million illnesses, 2.5 million medical visits, 71,000 hospitalizations, and 3,000 P&I deaths. (Note that past comparative data suggest that the total number of influenza-associated R&C deaths prevented by vaccination may be between two and four times greater than estimates using only P&I deaths). Efforts to increase vaccination coverage will further reduce the burden of influenza, especially among working-age adults younger than 65 years, who continue to have the lowest influenza vaccination coverage. This report underscores the benefits of the current vaccination program, but also highlights areas where improvements in vaccine uptake and vaccine effectiveness could deliver even greater benefits to the public’s health.
Although the timing and intensity of influenza virus circulation for the 2016-2017 season cannot be predicted, peak weeks of influenza activity have occurred between December and February during about 75% of seasons over the past 30 years, and significant circulation of influenza viruses can occur as late as May. Therefore, vaccination should be offered to anyone aged ≥6 months by the end of October if possible and for as long as influenza viruses continue to circulate.
Top of Page

These estimates are subject to several limitations. First, influenza vaccination coverage estimates were derived from reports by survey respondents, not vaccination records, and are subject to recall bias. Second, these coverage estimates are based on telephone surveys with relatively low response rates; nonresponse bias may remain after weighting. Estimates of the number of persons vaccinated based on these survey data have often exceeded the actual number of doses distributed, indicating that coverage estimates used in this report may overestimate the numbers of illnesses and hospitalizations averted by vaccination. Third, this model only calculates outcomes directly averted among persons who were vaccinated. If there is indirect protection from decreased exposure to infectious persons in a partially vaccinated population (i.e., herd immunity), the model would underestimate the number of illnesses and hospitalizations prevented by vaccination. Fourth, vaccine effectiveness among adults 65 years and older might continue to decrease with age, reaching very low levels among the oldest adults who also have the highest rates of influenza vaccination; thus, the model might have overestimated the effect in this group. Fifth, due to data availability, we are unable to estimate influenza-associated R&C deaths for the 2014-2015 or 2015-2016 seasons. P&I deaths are a fraction of all deaths associated with influenza. Based on past studies, (8,9) the total number of R&C deaths associated with influenza that occurred during the 2015-2016 season may be two to four times higher than reported P&I deaths. As data on R&C deaths become available CDC will update estimates of influenza-associated deaths (see CDC Study: Flu Vaccine Saved 40,000 Lives During 9 Year Period).
Top of Page