During 2014–2015, patients in northeastern Kenya were assessed for brucellosis and characteristics that might help clinicians identify brucellosis. Among 146 confirmed brucellosis patients, 29 (20%) had negative serologic tests. No clinical feature was a good indicator of infection, which was associated with animal contact and drinking raw milk.
Brucellosis is a zoonotic disease that can cause severe illness in humans and substantial economic losses in livestock production (1). The main causative agents of brucellosis in humans are Brucella abortus, B. melitensis, and B. suis (2). Infection in humans occurs mainly by ingestion of contaminated animal products, inhalation of contaminated airborne particulates, or direct contact with infected animals or their products (3). Clinical signs and symptoms of human brucellosis are nonspecific and highly variable (4). Persons who work with animals and their families are considered to be at high risk for infection (3,5). In animals, brucellosis is asymptomatic but can cause abortions, weak offspring, and sterility (5).
In developing countries, serologic assays based on rapid slide agglutination tests are the mainstay for diagnosis of brucellosis, but these assays have poor specificity (6). Generally, ELISA is considered to be more specific and sensitive, allowing for a better correlation with the clinical situation. Although PCR assays are highly sensitive and specific tools for rapid diagnosis of human brucellosis and simultaneous differentiation of Brucellagenotypes, they are often unavailable in many of these countries (7).
A review of brucellosis epidemiology in sub-Saharan Africa highlighted the fact that brucellosis is endemic in pastoral production systems where disease surveillance and control programs are poorly implemented (1). Within Kenya, seroprevalences of 2% and 7% have been reported among persons at high risk for brucellosis in Nairobi and Nakuru counties, respectively (8), and a national seroprevalence of 3% was reported in 2007 (9). More recently, Osoro et al. (10) showed variation (2.4%–46.5%) in seroprevalence across 3 counties in Kenya.
Diagnosis of febrile illnesses in developing countries is challenging because of the lack of imaging and reliable laboratory support. Clinical management of such illnesses is often done empirically, resulting in inaccurate treatment of patients and routine underreporting of disease (11). Data on the prevalence and potential risk factors associated with human brucellosis in Kenya are scant. The prevalent Brucella species in Kenya remain largely unknown. The purposes of this study were to assess the proportion of patients with brucellosis at 2 hospitals in northeastern Kenya and to describe patient characteristics that might help clinicians to identify brucellosis cases in areas without laboratory support. 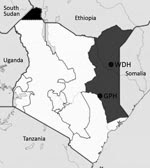 Figure. Locations of the 2 hospitals in the Northeastern Province of Kenya (dark gray shading) where human brucellosis was diagnosed in febrile patients seeking treatment, Kenya, 2014–2015. The solid black area in...
During 2014–2015, we enrolled patients with acute febrile illness seeking treatment at Garissa and Wajir hospitals in northeastern Kenya (Figure) by using systematic sampling intervals based on previously documented proportions of febrile patients recorded at each hospital. The study protocol was approved by the Scientific and Ethics Review Committee of Kenya Medical Research Institute. We obtained serum samples and tested them for brucellosis by using the modified Rose Bengal Plate Test (RBPT) (VLA Weybridge, United Kingdom) (12) and SERION ELISA classic Brucella IgM/IgG kits (Virion/Serion, Wurzburg, Germany) according to the manufacturers’ instructions. We extracted DNA from serum samples by using the High Pure Template Kit (Roche Diagnostics, Mannheim, Germany). We performed quantitative real-time PCR (qPCR) assays for the detection of brucellosis and speciation of Brucella species, as previously described (13) (Technical Appendix[PDF - 111 KB - 2 pages]Table 1). We classified patients as having brucellosis if they had positive qPCR results or had positive RBPT results confirmed by positive ELISA results. We fitted multivariate logistic regression models to assess demographic, clinical features, and plausible risk factors associated with brucellosis seropositivity by using a stepwise backward analysis procedure.
Overall, 1,067 patients participated in the study; 580 (54.4%) of participants were female, and 963 (90.3%) were of Somali ethnicity (Technical Appendix[PDF - 111 KB - 2 pages]Table 2). Brucellosis was established in 146 patients (13.7%, 95% CI 11.7%–15.9%). Of these, 29 (2.7%) had negative serologic test results for Brucella infection. B. abortus was the only Brucella species found using the Brucella species–specific qPCR.
Statistical analyses showed no significant differences in infection by ethnic group, county of residence, education status, or age group. Men had a significantly higher probability (odds ratio [OR] 1.98, p = 0.001) for having brucellosis (Table 1).
Considerable low sensitivity levels were found for clinical diagnosis of brucellosis in both hospitals (Technical Appendix[PDF - 111 KB - 2 pages]Table 3). Patients with brucellosis were mainly diagnosed with typhoid fever (63 patients [43.2%]), malaria (30 [20.5%]), pneumonia (12 [8.2%]), and other common tropical fevers or fevers of unknown origin (14 [9.6%]) (Table 1).
In the final combined multivariate analyses, brucellosis was significantly associated (p<0 .05="" fever="" lasting="" with="">14 days (adjusted OR [aOR] 2.86), contact with cattle (aOR 6.50) or multiple animal species (aOR 2.35), slaughtering of animals (aOR 2.20), and consumption of raw cattle milk (aOR 3.88). Herders were 1.69-fold more likely to be seropositive (Table 2).

This hospital-based study from a predominantly pastoral community in Kenya indicated a high prevalence (13.7%) of brucellosis in febrile patients, highlighting brucellosis as an important cause of acute febrile illnesses in northeastern Kenya. Although brucellosis has previously been described to occur in hospital patients in Kenya (1), it was not diagnosed by the treating hospital clinicians in 119/146 (81.5%) cases in our study. Instead, these cases were mainly attributed to other causes of fevers or fevers of unknown origin. In addition, 29 (2.7%) patients who had negative serologic test results for Brucellahad positive results for B. abortus by qPCR.
Our findings strongly suggest that patients with brucellosis were likely to leave the hospital without the specific treatment for brucellosis. This agrees with recent findings that showed that clinicians in Kenya continue to treat febrile patients for presumptive malaria, resulting in missed opportunities to accurately detect and treat other causes of fever (11,14). The results also highlight the usefulness of qPCR as a complementary assay to a combined ELISA and RBPT diagnostic approach in diagnosis of acute brucellosis and the need to establish national and regional reference laboratories with facilities for performing qPCR assays.
Contact with cattle or multiple animal species and consumption of raw milk from cattle were significantly associated with brucellosis in our study (Table 2). This association can be attributed to occupational and domestic contacts with livestock and social-cultural practices among communities in the study area that increase the risk for Brucella transmission, including nomadic movements, taking care of animals during parturition, consumption of raw milk from cattle and camels, and household slaughter of animals during traditional and religious ceremonies (9,15).
In this study, the only Brucella species detected was B. abortus, strengthening the assumption that brucellosis might be highly linked to cattle more than other animal species; however, further research is warranted. Additionally, the prevalent Brucella genotypes and biovars in Kenya remain to be determined.
Our study failed to better identify reliable clinical predictors for brucellosis. The lack of a clear clinical algorithm predictive of brucellosis supports the need for increasing clinician awareness of the disease and enhancing diagnostic capability for brucellosis in hospital settings.
This study has potential limitations. First, the study used acute-phase serum samples, making it difficult to demonstrate 4-fold titer rise. Follow-up of patients to obtain a convalescent-phase serum sample was not feasible because of ongoing inter-clan conflicts and militia activities in the region. Therefore, the possibility of patients who had previous exposure to Brucella but had residual antibodies in circulation cannot be ruled out.
Dr. Njeru is a research fellow at Friedrich-Loeffler-Institut in Jena, Germany. His primary research interest is the epidemiology of zoonotic diseases.

We thank the patients for taking part in this study. We acknowledge the staff of Friedrich-Loeffler-Institut and hospital staff for their valuable contributions. We also thank Eric Osoro for his facilitation of the data collection. Finally, we thank the Director of the Kenya Medical Research Institute for financial support of J.N. and permission to publish this paper.
The study was supported by the German Academic Exchange Service (grant no. A/12/97862), the CGIAR Research Program for Agriculture for Nutrition and Health (led by the International Food Policy Research Institute [grant no. 1100783/1]), and the German Ministry for Science and Education (grant no. 01KI1501).