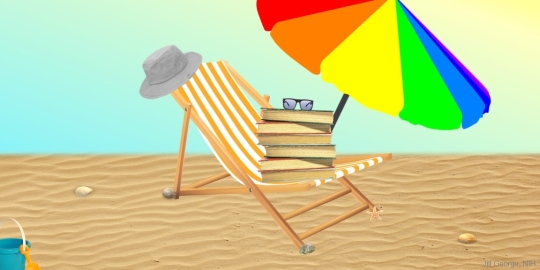 Summertime! Long weekends, a vacation, the threat of boredom. Time for uninterrupted reading—on beaches or in air-conditioned bedrooms. A chance to look beyond the best-seller lists or the daily news to dive, with full concentration, into one or two books that some friend has argued might be a life-changing experience. In that spirit, here are two for which I would make that argument to almost any friend.
In the sphere of science: The Age of Wonder: The Romantic Generation and the Discovery of the Beauty and Terror of Science, by Richard Holmes (HarperCollins, 2008). Holmes is primarily a literary biographer (of Coleridge and other Romantic poets), but also an art historian and a science junkie, who has written about ballooning and women scientists. Of the many books I’ve read about the growth of the scientific enterprise, The Age of Wonder stands out for several reasons: its deep engagement with the full range of cultural and political currents in which science arises; its focus on the excitement about discovery—geographical, astronomical, chemical, biological—that permeated the late 18th and early 19th centuries; and its absorption with personal histories of people who made those discoveries. Holmes is a superb storyteller and drawn to the complexities of life (especially in Britain) that influenced the talented people—Joseph Banks, Humphry Davy, several members of the Herschel family—who made novel observations that changed our perceptions of the world and solidified the place of science.
Although not an achievement on the scale of The Age of Wonder, a recent book by Matthew Cobb,Life’s Greatest Secret: The Race to Crack the Genetic Code (Profile Books, 2015), deserves mention here on the NIH Director’s Blog because it tells a wonderful story that features a modest man, Marshall Nirenberg, who was a nearly life-long NIH intramural scientist. It is neither necessary nor recommended to read this book in full (omit the final section that gallops through the past 40 years of genetics and genomics) to appreciate the elegance, importance, and drama of Nirenberg’s unveiling of the code, a critical step in understanding the origins and functions of all living things.
Outside the scientific world: I would urge anyone who has never read George Eliot’s Middlemarch: A Study of Provincial Life to devote some of the remaining summer days to it. Eliot (born as Mary Ann Evans) is part of the received literary canon, but too many readers never approach this, her greatest work, because Silas Marner bored them in high school. Middlemarch is on a very different scale, conceptually and emotionally. It is one of the few novels I know that creates an entire world, centered on a small English town and populated with a wide range of characters. None of these characters is simple in conception, yet several leave deep impressions—of obsessive scholarship (Rev. Edward Casaubon), naïve curiosity (Dr. Tertius Lydgate), romantic artistry (Will Ladislow), and, especially, intelligent sympathy (Dorothea Brooke). (My spouse notes that Lydgate, an ambitious physician with an interest in early human development, might even be called the first stem cell biologist, based on one remarkably prescient passage.)
After saying for over forty years that Middlemarch is my favorite novel, surpassing even Anna Karenina, I re-read it a few summers ago during long afternoons of immersion, and my ranking remains intact. A valuable way to supplement (and validate) a love for this novel is to read, preferably as a sequel, an eloquent account by the New Yorker writer, Rebecca Meade, of what the book means to a smart modern reader in My Life in Middlemarch (Crown Books, 2014).
I envy those who will now read these books for the first time.

Harold Varmus/Photo by Matthew Septimus
Harold Varmus, MD is the Lewis Thomas University Professor at Weill Cornell Medical College and a Senior Associate Core Member of the New York Genome Center. He was 14th Director of the National Institutes of Health and the 14th Director of the National Cancer Institute, and President of Memorial Sloan Kettering Cancer Center between these two public service positions. Among his vast list of accomplishments, Dr. Varmus is co-winner of the 1989 Nobel Prize in Physiology or Medicine for the discovery of the cellular origin of retroviral oncogenes and the 1982 recipient of the Albert Lasker Basic Medical Research Award.