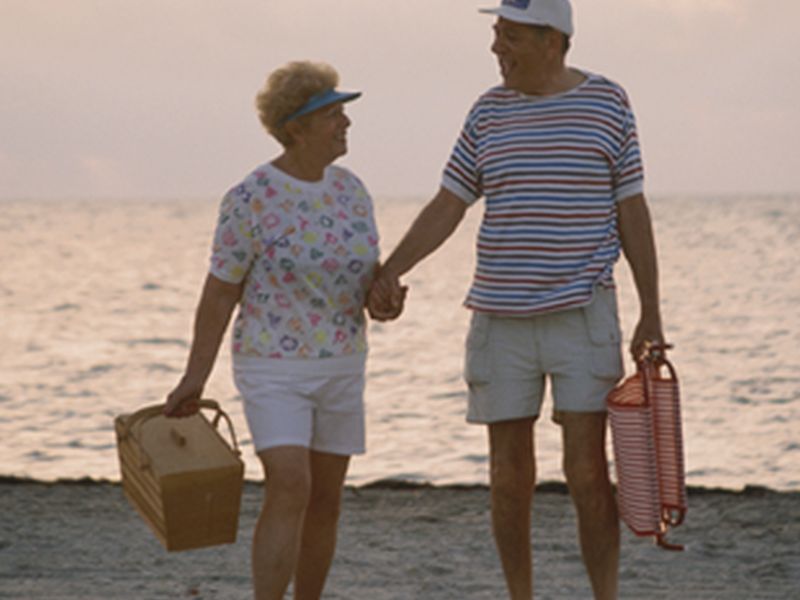 WEDNESDAY, Aug. 17, 2016 (HealthDay News) -- A healthy diet and regular exercise might be the keys to keeping your brain free of changes that lead to Alzheimer's disease, a small study suggests.
Researchers studied 44 patients between the ages of 40 and 85 who had mild memory problems. The investigators found that the brains of those who followed a Mediterranean diet and were physically active had fewer plaques and tangles, a hallmark of Alzheimer's, than those whose diet was less healthy and who were less active.
"Alzheimer's disease is known to be incurable, but it was not thought until recently that it can be preventable," said lead researcher Dr. David Merrill. He is an assistant clinical professor of psychiatry and biobehavioral sciences at UCLA David Geffen School of Medicine in Los Angeles.
Numerous studies have suggested that a healthy lifestyle is related to reduced brain shrinkage and lower rates of brain tissue atrophy, he said.
But this is the first study to show how lifestyle factors directly influence levels of abnormal protein deposits in the brain that have been long tied to Alzheimer's disease. Plus, the study subjects were people with subtle memory loss who had not yet been diagnosed with dementia, Merrill noted.
"The fact that we could detect this influence of lifestyle at a molecular level so early in a patient's symptoms surprised us," he said.
The findings reinforce the importance of living a healthy life in the "prevention of developing Alzheimer's brain pathology, even before development of clinically significant dementia," Merrill said.
The report was published Aug. 16 in the American Journal of Geriatric Psychiatry.
For the study, Merrill and colleagues had patients undergo PET scans to determine the levels of protein deposits in their brains. The researchers were specifically looking at levels of beta-amyloid deposits in spaces between nerve cells as well as tangles, knotted threads of the tau protein inside brain cells. Both are indicators of Alzheimer's.
The investigators found that lifestyle factors, such as healthy weight, physical activity and a Mediterranean diet were tied to lower levels of plaques and tangles.
A Mediterranean diet is one rich in fruits, vegetables, legumes, cereals and fish, and low in meat, dairy and saturated fats.
Merrill said the next step is to combine brain scans with studies of changes in diet, exercise and other lifestyle factors, such as stress and mental health.
Heather Snyder is senior director of medical and scientific operations at the Alzheimer's Association. "The field is wrestling with this idea that lifestyle can influence the changes in the brain seen in Alzheimer's disease," she said.
"We really want to understand how behaviors can change the underlying biology linked to Alzheimer's," Snyder added.
Several behaviors seem to be important to keeping your brain healthy, especially exercise and managing heart disease risks, such as diabetes, high blood pressure and cholesterol, she explained.
"There's lots of different ideas about what might be happening, but we don't know yet what the underlying biology is," Snyder said.
In the meantime, the Alzheimer's Association has 10 Ways to Love Your Brain:
Alzheimer's disease affects an estimated 5.4 million people in the United States and results in more than $200 billion a year in health care costs, according to the Alzheimer's Association.
SOURCES: David Merrill, M.D., Ph.D., assistant clinical professor, psychiatry and biobehavioral sciences, UCLA David Geffen School of Medicine, Los Angeles; Heather Snyder, Ph.D., senior director, medical and scientific operations, Alzheimer's Association; Aug. 16, 2016, American Journal of Geriatric Psychiatry
HealthDay
Copyright (c) 2016 HealthDay. All rights reserved.
News stories are provided by HealthDay and do not reflect the views of MedlinePlus, the National Library of Medicine, the National Institutes of Health, the U.S. Department of Health and Human Services, or federal policy.