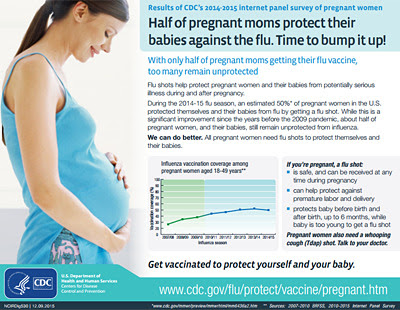 Why should pregnant women get a flu shot?

Flu is more likely to cause severe illness in pregnant women than in healthy women who are not pregnant. Changes in the immune system, heart, and lungs during pregnancy make pregnant women (and women who have recently given birth) more prone to severe illness from flu, as well as to hospitalizations and even death. Getting the flu during pregnancy also raises the risks of pregnancy complications, including premature labor and delivery. Studies have shown that vaccinating a pregnant woman can pass antibodies on to the baby that will protect against flu for six months after birth.
CDC recommends that pregnant women get a flu shot during any trimester of their pregnancy to protect themselves, their developing babies, and their newborn babies from flu. The nasal spray vaccine is not recommended for use in pregnant women. To learn more about flu and pregnant women, please visitPregnant Women & Influenza (Flu).

Is it safe for pregnant women and their developing babies to get a flu shot?

Yes. The flu shot has been given safely to millions of pregnant women over many years. There is a large body of scientific studies that supports the safety of flu vaccine in pregnant women and their babies. The CDC continues to gather data on this topic.

What side effects have pregnant women experienced from flu shots?

The most common side effects experienced by pregnant women are the same as those experienced by other people. They are generally mild and include:
If side effects occur, they usually begin soon after the shot is given and generally last for 1-2 days.
Rarely, flu shots can cause serious problems like severe allergic reactions. Anyone with a severe, life-threatening allergy to any of the vaccine ingredients should not get the shot.
Top of Page

Can pregnant women with egg allergies get vaccinated?

Most people who have an allergy to eggs can get vaccinated, with some additional safety measures. A person with severe (life-threatening) allergy to any vaccine component, including egg protein, should not get the shot, even if she is pregnant. Pregnant women should tell the person giving the shots if they have any severe allergies or if they have ever had a severe allergic reaction following a flu shot.
People who have ever had a severe allergic reaction to eggs can get recombinant flu vaccine if they are 18 years and older or they should get the regular flu shot (IIV) given by a medical doctor with experience in management of severe allergic conditions. People who have had a mild reaction to egg—that is, one which only involved hives—may get a flu shot with additional safety measures. Recombinant flu vaccines also are an option for people if they are 18 years and older and they do not have any contraindications to that vaccine. Make sure your doctor or health care professional knows about any allergic reactions. Most, but not all, types of flu vaccine contain a small amount of egg.

How is the safety of flu vaccines in pregnant women monitored?

CDC and FDA conduct ongoing safety monitoring of all vaccines licensed for use in the United States. CDC and FDA use two primary systems to monitor flu vaccine safety during pregnancy:
Top of Page

What studies has CDC conducted on flu vaccine safety during pregnancy?

Several studies conducted by CDC and partners support the safety of the flu vaccine for pregnant women and their developing babies.
Top of Page

Where should a pregnant woman get vaccinated?

Several studies have shown the small amount of thimerosal in vaccines does not cause harm. There is thimerosal-free flu vaccine available for people who want to avoid thimerosal. More information about thimerosal can be found at "Thimerosal and Flu Vaccines"

Can a breastfeeding women get a flu vaccine?

Yes. Breastfeeding women should get the flu vaccine to protect themselves from flu. Getting vaccinated reduces  mothers’ risk of getting sick and of passing the flu on to their babies, thus protecting them from flu also. This is especially important for children younger than 6 months old since they are too young to be vaccinated themselves. Breastfeeding women can get either a flu shot or nasal spray vaccine.
Publicado por salud equitativa en 12:09