BioEdge: Kids with Trisomy 13 and 18 can have good quality of life

BioEdge: Kids with Trisomy 13 and 18 can have good quality of life 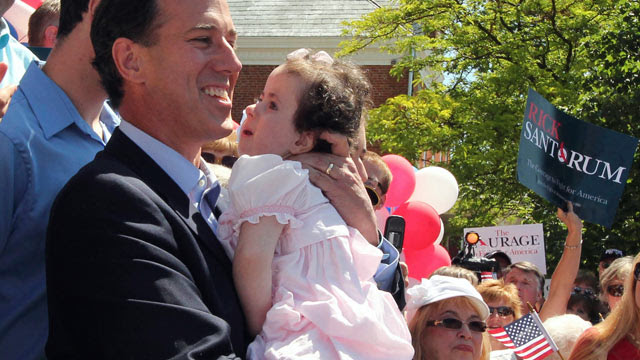 Former Senator Rick Santorum with daughter Bella in 2012
Should babies with Trisomy 13 and Trisomy 18 be given life-sustaining treatment? Both conditions are associated with severe physical and intellectual disabilities and most die children in their first year. So until recently, few of them were treated. Doctors regarded the conditions as “lethal congenital anomalies”.

However, according to a surprising study in JAMA, the Journal of the American Medical Association, it turns out that the consensus was wrong. Bioethicist John Lantos, a former President of the American Society of Bioethics and Humanities, commenting on an article about the survival rates, says:

In the age of social media, however, everything changed. Parents share stories and videos, showing their happy 4- and 5-year-old children with these conditions. Survival, it turns out, is not as rare as once thought. Children who were not institutionalized looked happy, cared for, and loved. It became increasingly awkward to describe these conditions as incompatible with life to parents who had ready access to information showing that it was not true.

One of these babies was Bella, the child of Senator Rick Santorum, a former presidential hopeful. He and his wife were told ““You realize that your child is going to die. You have to learn to let go.” The Santorums did not follow the doctors’ advice; their daughter is now 8 years old and in a stable medical condition.

This story illustrates how predictions of lethality become self-fulfilling prophecies [writes Lantos]. If Bella had not received supplemental oxygen or cardiopulmonary resuscitation, predictions that she would die early in life would have turned out to be true. Clearly, her chances of survival were not just a function of her underlying condition. They were also determined by the treatment she received.

Lantos says that decisions to withhold medical treatment can be based on a doctor’s assessment of the child’s future quality of life. A bad mistake, he contends.

The concept of quality of life is too vague and subjective to be helpful as a criterion for deciding about the appropriateness of treatment. No one can know with certainty what any infant is thinking, feeling, or experiencing, but what is observed can be interpreted. Children with trisomy 13 and 18 smile and laugh. They are not in pain. They give and receive love. These factors suggest that their subjective quality of life is not so poor that life-prolonging treatment should not be offered. Generally, the phrase quality of life is misused as a synonym for physical or neurological impairment. But if impairment is to be discussed, accurate terminology should be used. Some infants and children can have severe impairments and still have an excellent quality of life.

I must be getting old. For most of my life, I have been reading about the global need to curb births and the unmet demand for contraception. And then I opened this week’s edition of The Economist and discovered that the main problem facing couples is the unmet demand for children.
The Economist surveyed 19 countries, asking people how many children they wanted and how many they expected to have. The results were astonishing.
“For more and more couples, the greatest source of anguish is that they have fewer children than they want, or none at all. … In every rich country we surveyed, couples expect to be less fertile than they would like, and many in developing countries suffer the same sorrow….
“The pain of having no or fewer children than you desire is often extreme. It can cause depression and in poor countries can be a social catastrophe. Couples impoverish themselves pursuing ineffective treatments; women who are thought to be barren are divorced, ostracised or worse.”
I hope that executives at Marie Stopes International (see article below), the United Nations Population Fund and all the other global agencies dedicated to shrinking family sizes read The Economist’s advice:
"Governments and aid agencies have turned family planning into a wholly one-sided campaign, dedicated to minimising teenage pregnancies and unwanted births; it has come to mean family restriction. Instead, family planning ought to mean helping people to have as many, or as few, children as they want."