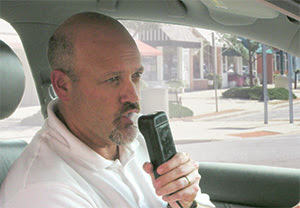 A new publication, Increasing Alcohol Ignition Interlock Use: Successful Practices for States, is available to inform states on how to increase ignition interlock use by convicted Driving While Impaired (DWI) offenders.
The publication is based on an evaluation conducted in collaboration with the Centers for Disease Control and Prevention, National Highway Traffic Safety Administration, and Governors Highway Safety Association. The evaluation looked at key features of interlock programs, or program keys, and use of interlocks in 28 states from 2006–2011. Each state’s program keys were rated and correlation analysis was used to determine which keys were related to higher interlock use.
Eight program keys were identified that states can use to strengthen state Alcohol Interlock Programs:require or incentivize use, levy strong penalties, monitor interlocks to ensure proper use,implement uniformly across state, coordinate across agencies, educate stakeholders about the program, provide adequate resources, and use data for action.
Why is this Important?
In 2013 over 10,000 people were killed in alcohol-impaired crashes. Ignition interlocks reduce recurrence of DWI by approximately 67% when installed on the vehicles of convicted DWI offenders. Most states have made ignition interlocks mandatory for some or all convicted offenders; however, only about one-fifth of all offenders are installing interlocks. Installing more ignition interlocks in the cars of DWI offenders’ would further reduce alcohol-impaired driving.
Learn More
Spread the Word
Do you know the 8 keys to improve state interlock programs? Learn successful ways to increase ignition interlock use 1.usa.gov/1JAkzdM
Over 10,000 people were killed in alcohol-impaired crashes in 2013. Learn how ignition interlocks can reduce drunk driving 1.usa.gov/1JAkzdM
Publicado por salud equitativa en 7:59