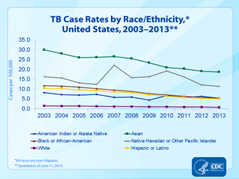 Slide set - Tuberculosis in the United States, 2013
Among all tuberculosis (TB) cases in the United States, racial/ethnic minorities continue to be disproportionately affected by TB. Asians continue to be the racial/ethnic group with the largest number of TB cases. Compared with non-Hispanic whites, the TB rate among Asians in 2013 was 26 times higher.
In 2013:
People with TB disease are sick. They may also be able to spread the bacteria to other people. TB can be prevented, treated, and cured, but early detection and proper treatment are needed.
What more can we do?
To achieve TB elimination, intensified efforts are needed to address the persistent disparities that exist between U.S.–born and foreign-born persons, and between whites and minorities in the United States. Improved awareness, testing, and treatment of latent infection and TB disease in minorities and foreign-born populations is essential to these efforts.