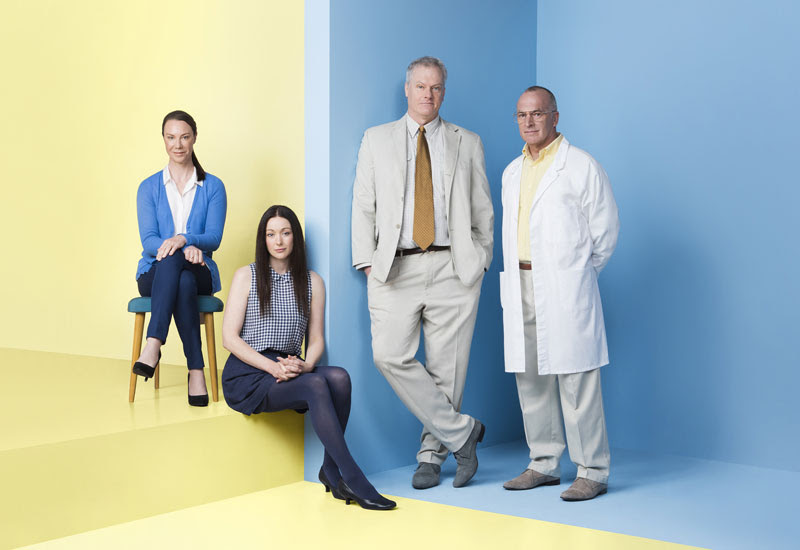 Promotional shot for "The Waiting Room"

The drama of bioethics is coming to light as more novelists and playwrights mine it for their stories. Last week we ran a feature about the world of the medical thriller and authors like Michael Crichton, Robin Cook and Tess Gerritsen. Now I've just discovered that the world premiere of a play about the development of IVF, "The Waiting Room", takes place next week in Melbourne.
The curious thing about this production is that the playwright is Kylie Trounson, the daughter of Alan Trounson. Trounson père is a controversial Australian scientist who was a pioneer of IVF in Australia. He developed a technique for freezing embryos and was an ardent promoter of the use of human embryonic stem cells. Bitter conflicts over the reproductive revolution emerge in the play, although the author  -- who has a very good relationship with her dad -- seems to frame him as a new Galileo.
Are there any Melbournians out there who would like to review it for BioEdge?
Our apologies to readers who may have received an unwanted email from New Media Foundation, the publisher of BioEdge, the other day. We manage a few newsletters and one of them, MercatorNet, was inadvertently posted out to BioEdge subscribers. We are contacting the email company to ensure that it won't happen again.

Leading bioethicists back euthanasia for mentally ill
by Xavier Symons | May 09, 2015
Why not legalise euthanasia for those suffering from an untreatable mental illness?

British woman seeks to bear dead daughter’s child
by Michael Cook | May 09, 2015
Frozen eggs to be fertilised with donor sperm.

Transhumanist launches campaign for US President
by Michael Cook | May 09, 2015
Zoltan Istvan is running for President in America’s 2016 elections.

Companies fight for market space inside your head
by Xavier Symons | May 09, 2015
There has been a dramatic rise in the number of brain-technology patents in the US.

“Professor, do your homework,” disability group tells Singer
by Michael Cook | May 08, 2015
Bioethicist slated by US National Council on Disability.

Outsourcing embryos in India
by Michael Cook | May 08, 2015
A recent Vice documentary explores the well-trodden path to shady surrogacy practices in India.