We analyzed hospital discharge data contained in the Nationwide Inpatient Sample (NIS) for 2003–2012 (10,11). The NIS, a stratified weighted sample of short-term and nonfederal hospitals, is designed to approximate a 20% sample of all community hospitals in the United States. As of 2012, 47 states participated in reporting discharge data to the NIS (only Alabama, Delaware, Idaho, and the District of Columbia had not participated), creating a sample representing 95% of the national population. The NIS is the largest collection of longitudinal inpatient care data in the United States and holds information on ≈8 million hospitalizations from >1,000 hospitals each year (10). NIS data are de-identified and include information on demographics, diagnostic and procedural codes, length of stay, discharge status, total charges, and expected payees associated with each hospitalization.

To account for the sampling design of the NIS, we analyzed all data by using the survey family of commands in Stata 13 (StataCorp LP, College Station, TX, USA). We applied hospital discharge weights provided in the NIS to estimate total national hospitalizations on the basis of the stratified sample. All sampled hospitals, regardless of whether they had a patient who was hospitalized with neurocysticercosis, were included for calculation of SEs and CIs. We examined neurocysticercosis hospitalizations by patient age, sex, race, place of service, discharge status, and length of stay; US region; associated diagnostic and procedural codes; and hospitalization charges. State-level assessment was not possible because of the sampling and stratification strategy used in the NIS. Mean annual hospitalization rates were calculated as the weighted number of hospitalizations per 100,000 population on the basis of the US Census Bureau data for each year during the study period (14). Age- and sex-adjusted rates were calculated by using the direct standardization method and the 2005 US Census population as the reference population.
We used Gaussian family generalized linear models with logarithmic function link within the Stata survey framework to estimate the crude and adjusted mean length of stay and mean hospitalization charges. We first constructed univariate generalized linear models to evaluate demographic variables of interest, retaining those that were significant at the p<0.2 level (Wald test) in the final multivariate models. The independent categorical variables we evaluated were sex, age, race, hospital region, and year of hospitalization. Once we built the final models, we estimated the mean length of stay and mean hospitalization charges for diagnoses and procedures commonly seen with neurocysticercosis (i.e., seizures, obstructive hydrocephalus, headache, stroke, mental health disorder, encephalitis/meningitis, cerebral edema, syncope, neuroimaging, ventricular shunt management, and central nervous system surgery) by individually introducing dummy variables encoding these clinical variables into the models. Inflation-adjusted charges were used in all models.

We analyzed hospital charges that were billed to private insurance, Medicaid, Medicare, and other sources from the payer’s perspective. Charges represent the amount that hospitals billed for services, not the actual cost of providing these services. Generally, total charges did not include professional fees, noncovered charges, or charges incurred in the emergency department unless the patient was admitted directly from the emergency department into the hospital. We adjusted all charges for inflation by using the Consumer Price Index, setting the base year to 2012. 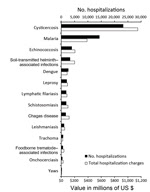