World Rabies Day is September 28. On this day, begin to take steps to keep yourself and your family free from rabies. Look for events in your area that provide an opportunity to celebrate World Rabies Day and get the facts on rabies prevention and control.
Rabies is a deadly virus that can kill anyone who gets it. Every year, an estimated 40,000 people in the U.S. receive a series of shots known as post-exposure prophylaxis (PEP) due to potential exposure to rabies. In addition, the U.S. public health cost associated with rabies is more than $300 million a year. Each year around the world, rabies results in more than 55,000 deaths – approximately one death every 10 minutes. Most deaths are reported from Africa and Asia with almost 50% of the victims being children under the age of 15.

The U.S. has been successful in eliminating canine rabies. Take steps to control rabies in your pets!

The Challenge of Rabies

Rabies is present on every inhabited continent. People usually get rabies when they are bitten by an animal that has the virus. In the U.S., the animals that most often get rabies are wild animals. Fortunately, the U.S. has been successful in eliminating a particular kind of rabies – known as canine rabies – that is responsible for rabies spreading from dog-to-dog.
However, canine rabies has not been controlled in many regions of the world, further threatening the health of humans and animals in these areas. In addition, some areas of the world have problems with large numbers of stray dogs, which can often come in contact with wild animals that have rabies. This often causes an increased number of rabid animals that have the potential to transmit the virus to humans.
The good news is that people can easily take steps to help prevent and control rabies. 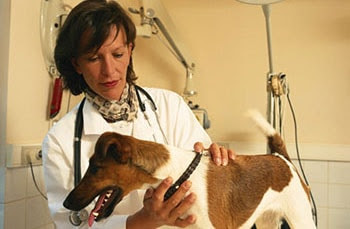 Be sure to take your cats and dogs to the veterinarian each year.

Take Pets to a Veterinarian for Their Rabies Shot

Make sure to take your pets, such as dogs and cats, to the veterinarian each year. A veterinarian can make sure your pets are up to date on their rabies shot, which can protect them from getting rabies. This is important, since animals that have not received a rabies shot and are exposed to rabies must be quarantined for six months, or put down.
Talk to your veterinarian about spaying or neutering your pet. This helps cut down on the number of unwanted and stray animals. These animals often do not have their rabies shot and are in close contact with wild animals.

Keep Away From Wildlife and Unfamiliar Animals

More than 90% of all animal rabies cases reported to CDC each year occur in wild animals. The main animals that get rabies include raccoons, bats, skunks and foxes.
One of the best ways to protect yourself and your family is to avoid contact with wild animals. Do not feed or handle them, even if they seem friendly.
Unfamiliar animals that are often thought of as pets, such as dogs and cats, should also be avoided. These animals are often in contact with wildlife and can also transmit rabies to humans.

Raccoons, bats, skunks and foxes often get rabies and should be avoided.
If you see an animal acting strangely, report it to animal control. Some things to look for are:
Sometimes, people may come across a dead animal. Never pick up or touch dead animals. The rabies virus may still be present in the saliva or nervous tissue, especially if they have only been dead for a short time. If you see a dead animal, call animal control to take care of the animal's body.

Stay Rabies Free In and Around Your Home

No matter where you live, rabies can threaten your family's health. Fortunately, there are things you can do around the home to help reduce the risk of getting rabies.
While most wild animals are found primarily outdoors, bats can sometimes fly into buildings. This includes your home and even the room where you sleep. If you see a bat in your home, confine the bat to a room by closing all doors and windows leading out of the room except those to the outside. The bat will probably leave soon. If not, approach it slowly, and when it lands place a box or coffee can over it. Slide a piece of cardboard under the container to trap the bat inside. Tape the cardboard to the container securely. Be sure to contact your health department or animal control authority so they can test the bat for rabies.
There are also steps you can take to "bat-proof" your home. Learn more about bats and how to "bat-proof" your home.