Find your best HIV prevention and treatment options.
National Gay Men's HIV/AIDS Awareness Day is a time for all Americans to think about the effects of HIV on gay and bisexual men. Since the first cases of AIDS were reported among gay and bisexual men more than 30 years ago, no group in the United States has been more affected by the epidemic. Although they make up only 2% of the overall population, gay and bisexual men – including those who inject drugs – account for over half of the 1.1 million people living with HIV in the United States, and two-thirds of all new HIV infections each year. Now more than ever, it's important for gay and bisexual men to know and talk about HIV prevention and treatment options.
Start Talking. Stop HIV., a new campaign of CDC's Act Against AIDSinitiative, seeks to reduce new HIV infections among gay and bisexual men by encouraging open discussion about a range of HIV prevention strategies and related sexual health issues between sex partners. Effective partner communication about HIV can reduce HIV transmission by supporting HIV testing, HIV status disclosure, condom use, and the use of medicines to prevent and treat HIV.

Know Your Prevention and Treatment Options

For HIV-negative gay and bisexual men who are sexually active, there are more tools available today and more actions to take to stay safe and healthy. Below are the key actions to take and you can learn more at the Start Talking. Stop HIV. web site. 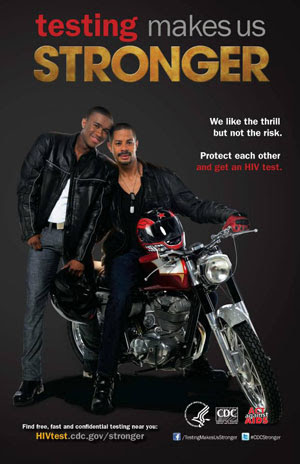 For gay and bisexual men living with HIV, the following actions can reduce the risk of transmitting HIV:
Data from a recent CDC study show that in 2010, 42% of all gay and bisexual men living with diagnosed HIV had achieved viral suppression, while only 26% of young gay and bisexual men were virally suppressed. CDC's focus on getting people with HIV into treatment – and staying in treatment – will protect the health of many as well as prevent further transmission of HIV. A new CDC HIV awareness campaign, HIV Treatment Works, encourages people living with HIV to get in care, start taking HIV medications, remain in care, and stay on treatment as directed.
Publicado por salud equitativa en 4:39