More than 29 million Americans have diabetes; 1 in 4 doesn’t know 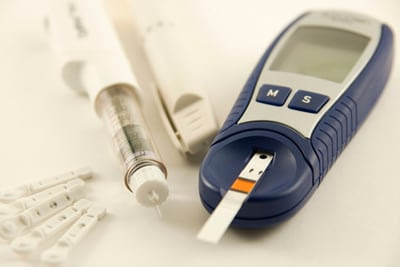 People with diabetes often use a blood glucose monitoring device to help them maintain healthy glucose levels.
More than 29 million people in the United States have diabetes, up from the previous estimate of 26 million in 2010, according to a report released today by the Centers for Disease Control and Prevention.  One in four people with diabetes doesn’t know he or she has it.
Another 86 million adults – more than one in three U.S. adults – have prediabetes, where their blood sugar levels are higher than normal but not high enough to be classified as type 2 diabetes.  Without weight loss and moderate physical activity, 15 percent to 30 percent of people with prediabetes will develop type 2 diabetes within five years.
“These new numbers are alarming and underscore the need for an increased focus on reducing the burden of diabetes in our country,” said Ann Albright, Ph.D., R.D., director of CDC’s Division of Diabetes Translation.  “Diabetes is costly in both human and economic terms. It’s urgent that we take swift action to effectively treat and prevent this serious disease.”
Key findings from the National Diabetes Statistics Report, 2014 (based on health data from 2012), include:
Diabetes is a serious disease that can be managed through physical activity, diet, and appropriate use of insulin and oral medications to lower blood sugar levels.  Another important part of diabetes management is reducing other cardiovascular disease risk factors, such as high blood pressure, high cholesterol and tobacco use.
People with diabetes are at increased risk of serious health complications including vision loss, heart disease, stroke, kidney failure, amputation of toes, feet or legs, and premature death.
In 2012, diabetes and its related complications accounted for $245 billion in total medical costs and lost work and wages. This figure is up from $174 billion in 2007.
For more information about diabetes and CDC’s diabetes prevention efforts, including evidence-based and cost-effective interventions, such as CDC’s National Diabetes Prevention Program, visit www.cdc.gov/diabetes.
Through the Affordable Care Act, more Americans can find and choose health care coverage that fits their needs and budget, including important preventive services such as diabetes screening that may be covered with no additional costs.  Visit Healthcare.gov or call 1-800-318-2596 (TTY/TDD 1-855-889-4325) to learn more.
###U.S. DEPARTMENT OF HEALTH AND HUMAN SERVICES