Hand, foot, and mouth disease is a contagious viral illness. It commonly affects infants and young children. There is no vaccine to prevent the disease. However, you can take simple steps to reduce your risk.
Hand, foot, and mouth disease, or HFMD, is a contagious illness that is caused by different viruses. Infants and children younger than 5 years old are more likely to get this disease. However, older children and adults can also get it. In the United States it is more common for people to get HFMD from spring to fall.

What Are the Symptoms of HFMD?

Symptoms usually begin with a fever, reduced appetite, sore throat, and a feeling of being unwell. A day or two after the fever starts, painful sores can develop in the mouth. A skin rash with flat red spots may also develop on the palms of the hands and soles of the feet. Sometimes a rash also occurs on the knees, elbows, and buttocks. This rash may blister but won't itch.
Not everyone will get all of these symptoms. Other people may show no symptoms at all, but they can still pass the virus to others.

HFMD is usually not serious. The illness is typically mild, and nearly all patients recover in 7 to 10 days without medical treatment. Complications are uncommon. Rarely, an infected person can develop viral meningitis (characterized by fever, headache, stiff neck, or back pain) and may need to be hospitalized for a few days.Other rare complications can include polio-like paralysis or encephalitis (brain inflammation), which can be fatal.

Yes. The viruses that cause HFMD can be found in an infected person's: 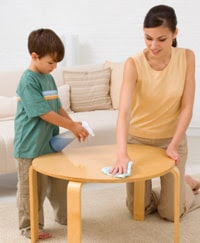 HFMD spreads from an infected person to others through:
People with HFMD are most contagious during the first week of their illness. However, they may be contagious for weeks after symptoms go away. Some people, especially adults, may not develop any symptoms, but can still spread the viruses to others.

Who Is at Risk for HFMD?

HFMD mostly affects infants and children younger than 5 years old. However, older children and adults can get it, too. When someone gets HFMD, they develop immunity to the specific virus that caused their infection. However, because HFMD is caused by several different viruses, people can get the disease again.

Can HFMD Be Treated?

There is no specific treatment for HFMD. Fever and pain can be managed with over-the-counter fever reducers and pain relievers, such as acetaminophen or ibuprofen. It is important for people with HFMD to drink enough fluids to prevent dehydration (loss of body fluids). 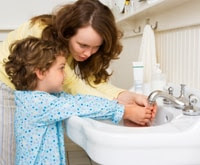 Can HFMD Be Prevented?

There is no vaccine to protect against HFMD. However, you can reduce the risk of getting infected with the viruses that cause HFMD by following a few simple steps:

Is HFMD the Same as Foot-and-Mouth Disease?