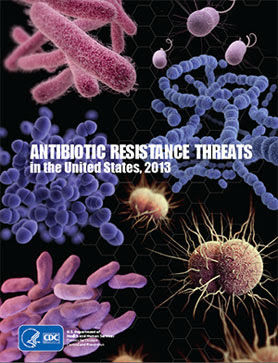 This report, Antibiotic resistance threats in the United States, 2013 gives a first-ever snapshot of the burden and threats posed by the antibiotic-resistant germs having the most impact on human health.
Each year in the United States, at least 2 million people become infected with bacteria that are resistant to antibiotics and at least 23,000 people die each year as a direct result of these infections. Many more people die from other conditions that were complicated by an antibiotic-resistant infection.
Antibiotic-resistant infections can happen anywhere. Data show that most happen in the general community; however, most deaths related to antibiotic resistance happen in healthcare settings such as hospitals and nursing homes.