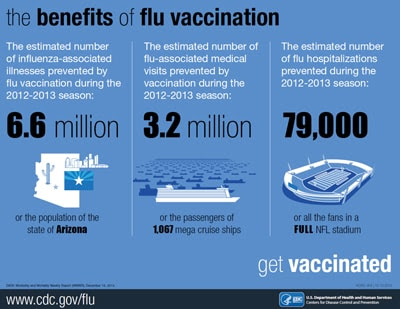 The Benefits of Vaccination
Entire Infographic

Flu vaccination prevented an estimated 6.6 million influenza-associated illnesses, 3.2 million medically attended illnesses, and 79,000 hospitalizations during the 2012-2013 flu season, according to a Centers for Disease Control and Prevention (CDC) report in the Morbidity and Mortality Weekly Report (MMWR). CDC also reported today that despite the benefits of flu vaccination, only 40% of Americans 6 months and older had reported getting a flu vaccine this season as of early November 2013.
The estimated benefits of vaccination for the 2012-2013 season are higher than any other season for which CDC has produced similar estimates.  These high numbers are attributable to the severity of the season.  The report estimates that last season there were a total of 31.8 million influenza-associated illnesses, 14.4 medically attended illnesses, and 381,000 hospitalizations in the United States.
“The estimated number of hospitalizations reinforces what we have always known about flu: that it is highly variable and can be very serious,” said CDC Director Tom Frieden, M.D., M.P.H.
Children aged 6 months through four years and persons aged 65 and older, who are among those most vulnerable to influenza, accounted for an estimated 69% of prevented hospitalizations.
CDC often cites flu as being responsible for 200,000 hospitalizations each season. This average is taken from data during the 1990s, when annual estimates ranges from 158,000 hospitalizations in 1990-1991 to a high of 431,000 hospitalizations in 1997-1998.
“Most of estimated hospitalizations last season were in people 65 and older. This shows how hard a severe H3N2 season can hit this vulnerable group,” Dr. Frieden said.
Estimates for illnesses and medical visits during 2012-2013 were elevated as well, but lower than what was seen during 2009-2010, when an H1N1 pandemic resulted in an estimated 52 million influenza illnesses and 24 million medical visits.
The CDC Director said that while older adults were hardest hit last season, “there were also 169 deaths among children reported to CDC, the highest number in a non-pandemic season since this type of reporting began in 2004.”
Three influenza deaths among children have been reported to CDC so far this season.
“We could prevent even more illness by increasing use of flu vaccines among people of all ages” said Dr. Frieden. The MMWR report estimates if 70% of the population had been vaccinated last season, another 4.4 million flu illnesses, 1.8 million medically attended illnesses, and 30,000 flu hospitalizations could have been prevented.
CDC also posted reports on its website on estimated flu vaccination uptake so far this season. National early-season vaccination coverage estimates are that 40% of Americans 6 months and older had received a flu vaccination by early November 2013 (39% of adults and 41% of children). This is similar to flu vaccination coverage last season at the same time.
Other online coverage reports indicated that vaccination among pregnant women (41%) and health care providers (63%) is about the same as it was this time last year. Among health care providers, the agency again noted high vaccination rates among clinical providers like pharmacists (90%) physicians (84%), and nurses (79%) but much lower vaccination rates among assistants or aides (49%) and health care providers working in long-term care facilities (53%).
“We are happy that annual flu vaccination is becoming a habit for many people, but there is still much room for improvement,” said CDC’s Anne Schuchat, MD.  “The bottom-line is that influenza can cause a tremendous amount of illness and can be severe.  Even when our flu vaccines are not as effective as we want them to be, they can reduce flu illnesses, doctors' visits, and flu-related hospitalizations and deaths.”
Seasonal influenza activity is increasing in parts of the United States.  Further increases in influenza activity across the U.S. are expected in the coming weeks.  “If you have not gotten your flu vaccine yet this season, you should get one now,” said Dr. Schuchat.
CDC released today’s reports in concert with National Influenza Vaccination Week (NIVW), a national observance taking place from December 8-14, 2013. Past flu vaccination coverage estimates have shown flu vaccination activity drops quickly after the end of November. NIVW was established by CDC and its partners in 2005 to underscore the importance of continuing flu vaccination throughout the flu season.  Peak weeks of influenza activity have occurred in January through March in more than 90% of seasons during the past 20 years, and significant circulation can occur as late as May.