Too many people in the United States remain unprotected from the flu going into the holiday season. Early flu season vaccination coverage results are now available for the general public, pregnant women, and health care providers. If you have not gotten your flu vaccination yet this season, you should get one now. 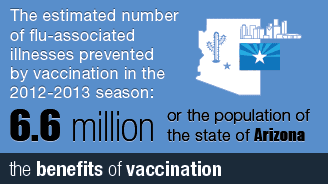 A new report released by the Centers for Disease Control and Prevention (CDC) today during National Influenza Vaccination Week (NIVW) highlights the benefits flu vaccine can provide, estimating conservatively that influenza vaccination prevented 79,000 hospitalizations and 6.6 million illnesses last season. The report also underscores how severe flu can be; it includes an estimate that 381,000 Americans were hospitalized from the flu last season.
Despite the benefits of vaccination and the potential severity of the flu, CDC also announced that fewer than half of Americans have gotten vaccinated so far this season. The agency hopes this information will encourage people who are still unvaccinated to get their vaccine before the 2013-2014 flu season takes off.

National Influenza Vaccination Week (NIVW) is coming to an end and has been a very successful week! Many flu promotion and vaccination events have been occurring throughout NIVW. Flu vaccination events have occurred in 25 markets in collaboration with local health departments, faith-based groups, private sector, and pharmacies targeting health disparate populations.

The week kicked off with a successful twitter chat. The hashtag used during the twitter chat, #NIVW2013, became a “trending topic” which Twitter uses to list the most talked about topics across the world, in real-time. A Press Conference was held on Thursday with Dr. Tom Friedan and Dr. Anne Schuchat to discuss flu activity and early-season influenza vaccination coverage estimates. A national Radio Media Tour took place Thursday and Friday with 40 scheduled interviews that will be played across the nation.

How many people got their flu vaccination already? View estimates with FluVaxView!

for Clinicians and Health Care Professionals

Influenza Surveillance Data the Way You Want it!