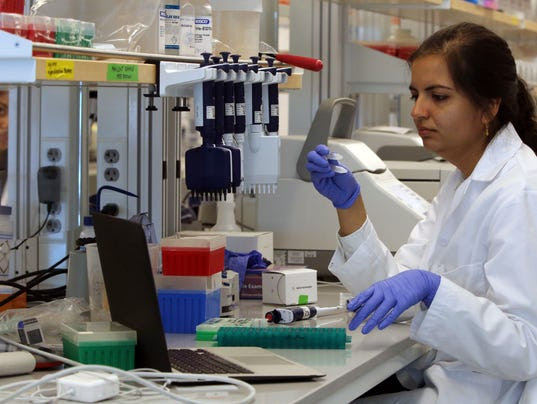 SHARE 274 CONNECT 458 TWEET 39 COMMENTEMAILMORE
WASHINGTON — Insurers will soon reassess how they predict costs; patients will let doctors know what medications won't work with their particular genomes; and researchers will look at hospital records in real time to determine the cheapest, most effective ways to treat patients — all because of developments in what is known as big data.
Driven by industry trends and the Affordable Care Act, the analysis of large sets of data, such as medication usage or hospital readmissions, has enabled health care providers and policymakers to make smarter decisions and predict future trends. Electronic medical records and decisions by governments and companies to share data have made for smarter decision-making that can save money and provide better care, experts say.
"We've been working with 15- to 20-year-old technology," said Winston Hide, associate professor of bioinformatics and computational biology at Harvard School of Public Health. "It's creakingly slow. We've got a completely new paradigm coming."
Arijit Sengupta, CEO of data analysis firm BeyondCore, recently used big data to determine that the young-and-healthy expected to balance out the insurance pools in the federal and state exchanges may actually cost more than expected as they gain access to mental health care — also a provision in the Affordable Care Act.
"It took two hours to run an analysis," Sengupta said. "We can actually go in and ask a crazy question without any hypothesis. We need to figure out what is happening in health care."
Often, the results are the opposite of what's expected, as was the case with a flurry of high readmission rates for diabetic patients. Everyone assumed it was older people forgetting to take their insulin. Instead, Sengupta said, it was young women trying to lose weight, so they skipped their insulin.
Last week, during a White House conference, two businesses, MedRed and BT Health, announced they would work together on a new "health cloud" project. The data cloud will include "de-identified" information — or data scrubbed clean of any identifying personal information — from the U.S. Food and Drug Administration and the Center for Medicare and Medicaid Services, along with data from the United Kingdom's National Healthcare Service.
That cloud will be used by universities, pharmacologists and hospitals systems for research. Will Smith, CEO of MedRed, said that information could be used to see if those with mental health diagnoses receive best-practices treatments, to look at the prescribing patterns or physicians, or to compare the outcomes of two groups of patients using two different medications to treat diabetes.
Neal Stine, principal consultant of BT Health, said the data may show which prescriptions are cheapest or most cost-effective — and it might not always be the generic prescription. "That would be a sea change in how formularies are developed now," he said.
The information could also help predict what kinds of drugs need to be developed, whether people should be treated as inpatients or outpatients, and to answer questions about what practices in Accountable Care Organizations work best or what the health habits are of the newly insured.
Hide and other researchers said they see tremendous opportunity in genetic research that can show the best treatment for a patient. Sequencing the human genome, Hide said, is becoming faster and cheaper.
"It's going to become a commodity," he said. 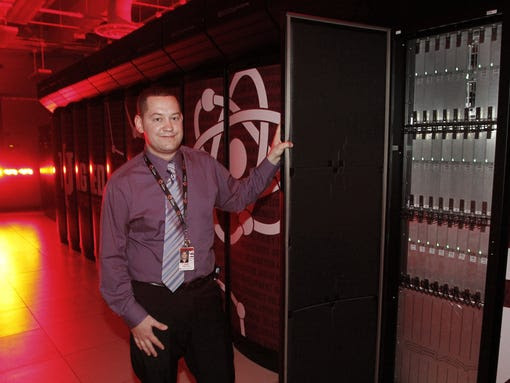 Super computers, such as the Big Red II at Indiana University, crunch large data sets to find health care insights.(Photo: KELLY WILKINSON, GANNETT)
Genomic research coupled with big data analysis will enable a patient to see a doctor and hand over individualized information that will guide treatment. Given a person's genetic makeup, what medicine will be most effective? Genetic information will also help suggest potential illnesses and treatments that a physician may not think to look for.
Beyond that, as that information becomes accessible to researchers, they will be able to find more treatments and medications as they can quickly see their effects on people, as well as their effects on people with specific genetic makeups. Then doctors will be able to punch in their patients' numbers and instantly find out the best treatment.
Several factors have made genomic research and data analysis possible, said Eric Schadt, director of the Institute for Genomics and Multiscale Biology at New York's Mount Sinai Hospital: changes in the law, financial incentives and "the demand of patients for better health care and outcomes."
Sequencing a person's genome costs about $3,000, Schadt said.
"It is rapidly approaching the cost of a standard test, such as an MRI or PET scan," he said. "However, sequencing a single human genome produces hundreds of gigabytes of data, which turns into petabytes of data when you combine several thousand genomes, medical histories of the individuals associated with those genomes, their drug treatments, their environments, microbiomes (the bacteria that live in your gut and your skin), and so on. Ideally we want to be looking at millions of individuals together to discern the patterns that identify different subtypes of disease" and determine the best way "to diagnose, treat and even prevent disease."
Mount Sinai has used the data to help reduce the 30-day readmission rate for patients by 56% by determining which patients were most at risk, then taking precautions to prevent them returning to the hospital. That's important because the law requires fines for hospitals that readmit Medicare patients within 30 days for specific illnesses.
"I think in five years' time, we will be talking about advances in several different areas such as cancer that are routinely impacted by big data," Schadt said. "Even today that is happening, although most simply are not aware of it."
Though the rewards of such data use are great, so are the privacy concerns, Hide said. "We have opened a pandora's box, and it makes the NSA's problems look trivial."
If made public, genomic data could lead to employment discrimination, as some people might not be hired for jobs because of potential health problems that could raise an employer's insurance costs.
There have been cases in which health and insurance information has been released accidentally. The industry must do better, Sengupta said.
"We treat privacy now as a legal issue with a disclaimer," Sengupta said. "We need to have privacy built in. Technology created the problems, but technology can also fix it.
Publicado por salud equitativa en 3:46