The 19th annual observance of National HIV Testing Day is June 27, a time to promote one of our best tools for HIV prevention --- HIV testing. Join the National HIV Testing Day campaign to encourage people across the country to ‘Take Control. Take the Test.’ on Testing Day and year round.
The U.S. Preventive Services Task Force (USPSTF) recently released HIV testing recommendations that everyone aged 15 to 65 should be screened for HIV infection. CDC also recommends HIV testing for everyone at least once as a part of routine health care, and once a year for people at increased risk—such as gay and bisexual men, people who inject drugs, or people with multiple sex partners. Regular testing allows people who have HIV to know their status, get life-saving treatment and care, and prevent HIV transmission to others.
Too many people don’t know they have HIV. More than 1 million people are living with HIV in the United States, but almost 1 in 5 do not know they are infected. 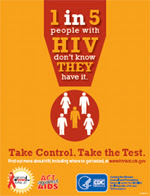 CDC continues to work with federal, state, and local partners to expand routine HIV testing—not just on National HIV Testing Day but all year long. In 2010, CDC implemented new phases of its successful Expanded Testing Initiative, funding 30 health departments to focus on increasing HIV testing among African Americans and Latinos as well as gay and bisexual men and injection drug users of all races and ethnicities.
CDC’s Act Against AIDS (AAA) campaigns work to further expand HIV testing, raise awareness about HIV and AIDS among all Americans, and reduce the risk of infection among the hardest-hit populations.

Take part in one or more CDC Testing Day activities. Some activities simply invite you to visit a website or watch a video, and others ask you to take part in the HIV testing conversation by participating in a TwitterChat or creating a Let’s Stop HIV Together ad on Facebook. There are many ways to get involved this Testing Day.
Publicado por salud equitativa en 6:31