Questions and Answers about Bisphenol A

What is bisphenol A?

Bisphenol A (BPA) is a chemical produced in large quantities for use primarily in the production of polycarbonate plastics and epoxy resins.

Where is BPA found?

Polycarbonate plastics have many applications including use in some food and drink packaging, e.g., water and infant bottles, compact discs, impact-resistant safety equipment, and medical devices. Epoxy resins are used as lacquers to coat metal products such as food cans, bottle tops, and water supply pipes. Some dental sealants and composites may also contribute to BPA exposure.

How does BPA get into the body?

The primary source of exposure to BPA for most people is through the diet. While air, dust, and water are other possible sources of exposure, BPA in food and beverages accounts for the majority of daily human exposure.

Bisphenol A can leach into food from the protective internal epoxy resin coatings of canned foods and from consumer products such as polycarbonate tableware, food storage containers, water bottles, and baby bottles. The degree to which BPA leaches from polycarbonate bottles into liquid may depend more on the temperature of the liquid or bottle, than the age of the container. BPA can also be found in breast milk.

Why are people concerned about BPA?

One reason people may be concerned about BPA is because human exposure to BPA is widespread. The 2003-2004 National Health and Nutrition Examination Survey (NHANES III) conducted by the Centers for Disease Control and Prevention (CDC) found detectable levels of BPA in 93% of 2517 urine samples from people six years and older. The CDC NHANES data are considered representative of exposures in the United States. Another reason for concern, especially for parents, may be because some animal studies report effects in fetuses and newborns exposed to BPA. 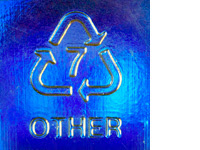 If I am concerned, what can I do to prevent exposure to BPA?


Where can I go for more information?

For more information on what other federal agencies are doing related to BPA, visit the following websites and search for “bisphenol A.”

How is NIEHS/NTP Researching the Health Effects of BPA

Researchers studying the health effects of the chemical bisphenol A (BPA) gathered in North Carolina in 2009 to launch an integrated research initiative to produce data that will allow for a comprehensive assessment of its possible human health effects.

Researchers who received funds from the American Recovery and Reinvestment Act to study BPA were brought together to meet with scientists from academia and government already working on the compound. The meeting was held Oct. 6, 2009 at the National Institute of Environmental Health Sciences (NIEHS). http://www.niehs.nih.gov/news/newsroom/releases/2009/october28/index.cfm

Why did NIEHS use Recovery funds to support BPA research?

There is much uncertainty regarding the chemical BPA. BPA is used in certain food contact materials and was first approved by the FDA in the early 1960s. While recent assessments by authorities in the United States, Canada, Europe, and Japan agree that current food contact uses of BPA are safe, these assessments have identified the need to address data gaps. NIEHS wants to fill many of the research gaps in this area so informed personal and public health decisions can be made. For these reasons, NIEHS prioritized BPA research as a Signature initiative in the grants program undertaken with stimulus funds from the American Recovery and Reinvestment Act (ARRA). Some of the disease endpoints that Recovery Act-funded researchers will be investigating include behavior, obesity, diabetes, reproductive disorders, development of prostate, breast and uterine cancer, asthma, cardiovascular diseases and transgenerational or epigenetic effects.

What impact will the Recovery funding focused on BPA have?

The Recovery Act money will support the development of new data in a limited number of strategic areas where there is very little data. It will also help stimulate the replication and expansion of published studies that have been deemed by NTP/CERHR to have specific deficiencies. The goal of these ARRA funded grants is to produce both the animal and human data necessary to allow for a comprehensive assessment of the human health effects of BPA. Collectively, the results of these new ARRA funded studies and ongoing studies should begin to chip away at the uncertainties and research gaps and provide a better perspective of the potential threat that exposure to bisphenol A poses to public health.

Since January 2010, NIEHS grantees have published more than 100 papers addressing many of these research gaps.

In September 2008, the National Toxicology Program (NTP) released its final report on Bisphenol A.

What did the NTP conclude?

The NTP has some concern for effects on the brain, behavior, and prostate gland in fetuses, infants, and children at current human exposures to bisphenol A.

The NTP has minimal concern for effects on the mammary gland and an earlier age for puberty for females in fetuses, infants, and children at current human exposures to bisphenol A.

The NTP has negligible concern that exposure of pregnant women to bisphenol A will result in fetal or neonatal mortality, birth defects, or reduced birth weight and growth in their offspring.

The NTP has negligible concern that exposure to bisphenol A will cause reproductive effects in non-occupationally exposed adults and minimal concern for workers exposed to higher levels in occupational settings.

Listen to NTP Speak on BPA

BPA.
It stands for Bisphenol A. It is a chemical used in the production of plastics and resins, such as some water bottles and the coatings of some food cans. It is also used in some consumer goods, such as compact discs and thermal cash register tapes. And it has generated controversy about its impact on human health and development.
The Food and Drug Administration’s assessment is that the scientific evidence at this time does not suggest that the very low levels of human exposure to BPA through the diet are unsafe.
The agency has performed extensive research on BPA, has reviewed hundreds of other studies, and is continuing to address questions and potential concerns raised by certain studies.
FDA scientists have also recently determined that exposure to BPA through foods for infants is much less than had been previously believed and that the trace amounts of the chemical that enter the body, whether it’s an adult or a child, are rapidly metabolized and eliminated.
Dennis M. Keefe, Ph.D., director of FDA’s Office of Food Additive Safety, and other officials at FDA say the agency takes all concerns about BPA seriously and is evaluating them as part of the agency’s ongoing oversight of food safety.
Because of some studies in young animals that raised potential concerns about the safety of BPA, there has been particular concern about its use in infant bottles and training (sippy) cups, FDA has been supporting industry efforts to find alternatives to BPA in the manufacture of these and other products, Keefe says.

BPA has been used since the 1960s to make polycarbonate plastics and epoxy resins. These hard, clear plastics are often used in containers that store food and beverages, such as some water bottles. The resins are also used to protect foods from microbial and other contamination by coating the inside of metal products, such as some food cans.
Research has shown that people are exposed to BPA because small amounts can migrate into the food and beverages from their containers. Reports from some animal studies have raised potential concerns that BPA exposure may cause multiple health problems, including reproductive disorders, diabetes and cardiovascular disease.
There have also been studies that contend that BPA is a hazard to people too. But FDA—as well as the European Food Safety Agency (EFSA)—has carefully assessed these studies and finds no convincing evidence to support that belief.
The regulatory agency must objectively weigh all the evidence, says Keefe. “We make public health decisions based on a careful review of well performed studies, not based on claims or beliefs. We have to perform an unbiased evaluation of the data,” he says.
FDA is continuing its research and monitoring of studies to address uncertainties raised about BPA.

With the support of the National Institute of Environmental Health Sciences (NIEHS) and the National Toxicology Program (NTP), scientists at FDA’s National Center for Toxicological Research (NCTR) have been studying BPA.
The NCTR researchers have been conducting in-depth studies of BPA since September 2008, when a report by the NIEHS and NTP called for more research into the potential toxic effects of BPA on fetuses, infants and children.
NCTR’s findings include:
NCTR researchers report that they were able to build mathematical models of what happens to BPA once it’s in the human body. These models showed that BPA is rapidly metabolized and eliminated through feces and urine. They found that BPA is “exactly the opposite” from some other toxins, like dioxin, that can stay in the body’s tissues for months or even years.
The center’s toxicology research has not found evidence of BPA toxicity at low doses in rodent studies, including doses that are still above human exposure levels.

What Can Consumers Do?

Consumers should avoid changes in their food consumption that would prevent good nutrition, particularly for infants.
Here is information for consumers who want to limit their exposure to BPA:

This article appears on FDA's Consumer Update page6, which features the latest on all FDA-regulated products.
March 30, 2012