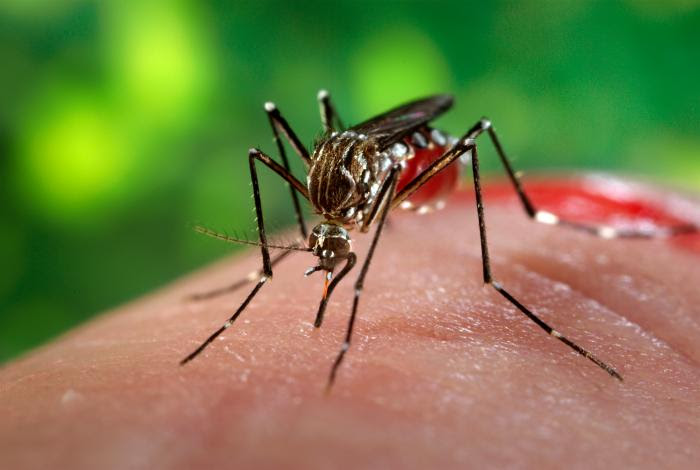 Photo: An Aedes aegypti mosquito, the species that most often transmits dengue, feeds on a human host. (CDC, 2006).
When mosquitoes are infected with dengue virus, they experience an array of changes in the activity of genes and associated functions of their salivary glands. This could lead to increased blood-seeking behavior and virus transmission to humans, according to a recent study by NIAID-funded scientists at Johns Hopkins. The researchers found that dengue infection triggered increased activity of 130 salivary gland genes, including genes with functions like enabling the spread of virus between cells, destroying the mosquito’s immune system cells and making blood feeding more efficient.

For more information on the study’s results and their significance, read the NIAID Media Availability at http://www.niaid.nih.gov/news/newsreleases/2012/Pages/DengueSaliva.aspx.

WHAT:
Mosquitoes infected with dengue virus experience an array of changes in the activity of genes and associated functions of their salivary glands, and these changes may lead to increased virus transmission, according to a recent study led by George Dimopoulos, Ph.D., of the Malaria Research Institute and Bloomberg School of Public Health at Johns Hopkins University. Some of these changes involve the mosquito’s immune system and affect its susceptibility to infection with the virus. Others involve factors that enhance the mosquito’s capacity to feed on blood, possibly leading to greater transmission of dengue virus to humans, the study authors write.
According to the World Health Organization, each year, dengue virus infects about 50 million to 100 million people and causes between 10,000 and 15,000 deaths, most of them in children. Symptoms include high fever and pain in the muscles and joints, and in severe cases can include bleeding under the skin, damage to blood vessels and death. The disease, which is prevalent in tropical and subtropical regions of the world, has been reported recently in parts of the United States, such as Hawaii, Puerto Rico and Florida. There is no vaccine or drug treatment for dengue. The only way to prevent infection is to avoid being bitten by Aedes mosquitoes, which can carry the virus in their salivary glands.
The Hopkins researchers sought to learn how dengue virus affects the way the glands function during virus transmission. They compared the expression of several thousand genes in Aedes aegypti mosquitoes that either were or were not infected with dengue virus. The researchers found that dengue infection triggered increased activity of 130 salivary gland genes, including genes with functions such as enabling the spread of virus between cells, destroying the mosquito’s immune system cells and making blood feeding more efficient.
Through further experiments, the researchers found three salivary gland genes that modulate dengue virus infection of mosquitoes and two olfactory genes that help control the way mosquitoes search for and bite humans. Future studies should address the roles and functions of these and other genes that are triggered by dengue infection, the investigators write.
The study was supported by the National Institute of Allergy and Infectious Diseases (NIAID), part of the National Institutes of Health.
ARTICLE:
S Sim et al. Dengue virus infection of the Aedes aegypti salivary gland and chemosensory apparatus induces genes that modulate infection and blood-feeding behavior

WHO:
Adriana Costero-Saint Denis, Ph.D., vector biology program officer in NIAID’s Parasitology and International Programs Branch, is available to discuss this study.
CONTACT:
To schedule interviews, please contact Nalini Padmanabhan, (301) 402-1663, niaidnews@niaid.nih.gov.
For more information about NIAID’s research on dengue and other vector-borne diseases, visit the NIAID Web portals on Dengue and Vector Biology.
NIAID conducts and supports research—at NIH, throughout the United States, and worldwide—to study the causes of infectious and immune-mediated diseases, and to develop better means of preventing, diagnosing and treating these illnesses. News releases, fact sheets and other NIAID-related materials are available on the NIAID Web site at http://www.niaid.nih.gov/.
About the National Institutes of Health (NIH): NIH, the nation's medical research agency, includes 27 Institutes and Centers and is a component of the U.S. Department of Health and Human Services. NIH is the primary federal agency conducting and supporting basic, clinical, and translational medical research, and is investigating the causes, treatments, and cures for both common and rare diseases. For more information about NIH and its programs, visit www.nih.gov.