Enhanced national surveillance for invasive meningococcal disease in England and Wales identified an increase in laboratory-confirmed capsular group Y (MenY) disease from 34 cases in 2007 to 44 in 2008 and 65 in 2009. For cases diagnosed in 2009, patient median age at disease onset was 60 years; 39% of patients had underlying medical conditions, and 19% died. MenY isolates causing invasive disease during 2007–2009 belonged mainly to 1 of 4 clonal complexes (cc), cc23 (56% of isolates), cc174 (21%), cc167 (11%), and cc22 (8%). The 2009 increase resulted primarily from sequence type 1655 (cc23) (22 cases in 2009, compared with 4 cases each in 2007 and 2008). cc23 was associated with lpxL1 mutations and meningitis in younger age groups (<25 years); cc174 was associated with nonmeningitis, particularly pneumonia, in older age groups (>65 years). The increase in MenY disease requires careful epidemiologic and molecular monitoring.
Invasive meningococcal disease is associated with substantial rates of illness and death worldwide (1), with most infections caused by 5 capsular groups, namely A, B, C, W135, and Y (2). In the United Kingdom, where capsular group C (MenC) conjugate vaccines have been routinely used since 1999 (3,4), capsular group B (MenB) causes >80% of confirmed cases, particularly among infants and adolescents (5). Invasive infections caused by other capsular groups are infrequent and sporadic (6,7).
Invasive capsular group Y (MenY) has historically been uncommon in the United Kingdom and until recently accounted for <30 cases annually (5). After 2006, however, enhanced surveillance by the Health Protection Agency (HPA) identified an increase in invasive MenY cases in England and Wales. In addition, recent surveys suggest that MenY carriage in England increased substantially during the past decade (8,9). Consequently, the HPA investigated the clinical, epidemiologic, and microbiologic characteristics of invasive MenY disease in England and Wales during 2007–2009.

The HPA conducts meningococcal surveillance in England and Wales through a combination of clinical and laboratory reporting schemes and receives all meningococcal death registrations from the Office for National Statistics (www.statistics.gov.uk

). In addition, the HPA Meningococcal Reference Unit provides a national service for species confirmation and grouping/typing of invasive Neisseria meningitidis and offers free nonculture confirmation by using PCR directly from clinical specimens routinely submitted by National Health Service hospital laboratories (5). Data from all sources are reconciled in a single database and deduplicated regularly. Invasive meningococcal disease was defined as isolation of the organism or identification of meningococcal DNA from a normally sterile body site. MenY was confirmed by sero/genogrouping (5).

DNA was extracted by using the DNeasy blood and tissue kit (QIAGEN, Crawley, UK). Briefly, 1 mL meningococcal suspension in physiologic saline (adjusted to an optical density equal to 0.1 at 650 nm) was heat-killed at 60°C for 70 min and then pelleted at 6,000 × g for 10 min. After aspiration of the supernatant, DNA was extracted by using the manufacturer’s gram-negative protocol (QIAGEN) (10).

Clinical follow-up was conducted for all MenY cases in 2009 confirmed by culture, PCR, or both. The general practitioner, hospital physician, or local health protection unit was contacted for information about underlying medical conditions, recent travel, clinical presentation, sequelae, and outcome.

Data were analyzed by using Stata version 11.0 (StataCorp LP, College Station, TX, USA). Annual age-specific population estimates were obtained from the Office for National Statistics. Data that did not follow a normal distribution were described as medians with interquartile ranges (IQRs) and compared by using the Mann-Whitney U test. Proportions were compared by using the χ2 test or Fisher exact test, as appropriate. Logistic regression was used to calculate odds ratios (ORs) with 95% CIs after adjustment for potentially confounding variables and to identify independent risk factors for death.

HPA has approval under the Health and Social Care Act 2001 to process confidential patient information for public health purposes. Details are available at www.legislation.hmso.gov.uk/si/si2002/20021438.htm 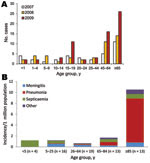 The nadA gene was found exclusively in cc174 isolates, all 24 of which harbored the gene. Sequence analysis of nadA was performed among a subset of cc174 isolates (collected during epidemiologic year 2007–08 [7 isolates]) all harbored identical alleles encoding NadA peptide subvariant 3.P0008. 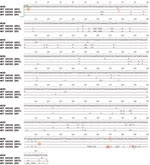 Figure 2. Newly identified lpxL1 mutations XV, XVI, and XVII. lpxL1 sequence data from isolates harboring each of the corresponding meningococcal capsular group Y mutations (in parentheses), England and Wales. Mutations are aligned...
lpxL1 genotype was indeterminate in 1 cc174 strain because the existing primers failed to amplify the gene and flanking regions, possibly because of variation in the primer target sites. Mutations in the lpxL1 gene were identified in all but 2 cc23 isolates and none of the other ccs. Of the 62 cc23 isolates with an lpxL1 mutation, all 30 ST-1655 isolates harbored a previously unpublished single-base deletion at nt A4 (designated mutation XVI) (Figure 2), which resulted in a frame shift and premature stop codon. This mutation also was observed in 1 ST-8414 (cc23) and 3 ST-23 (cc23) isolates. Fifteen of the remaining 19 ST-23 isolates harbored frame-shifted alleles (1 mutation IV, 13 mutation V, and 1 mutation VI [15]), whereas another was interrupted by the insertion sequence IS1301 (mutation I) (16). The remaining 3 ST-23 isolates harbored an lpxL1 allele in which 3 adenines occupied the prototype (strain MC58) stop codon. This configuration was designated mutation XV. The resultant allele was extended by 18 bp. Of the remaining 9 cc23 isolates (1 not fully characterized for ST and the remainder belonging to other less well-represented STs), another 2 harbored mutation XV, 6 harbored mutation V (16), and 1 harbored a previously unpublished deletion at nt T813 (designated mutation XVII). The frame-shifted allele was extended by 47 bp.
Approximately half (n = 56) of the isolates had mutations, which potentially resulted in an underacylated lipid A moiety of lipooligosaccharide and belonged mainly to either ST-1655 (30 [54%]) or ST-23 (18 [32%]). The number of mutant lpxL1 isolates increased from 12 each in 2007 and 2008 to 32 in 2009, mainly because of the increase in ST-1655.
Mutation XV is predicted to extend the encoded peptide product by 6 aa. However, it does not alter the upstream amino acid sequence, which remains complete in comparison with the putative wild-type peptide. It is possible, therefore, that the enzyme encoded remains functional. Of the affected isolates, 3 of 5 occurred in children <15 years of age, none of whom died; clinical diagnosis was available for 4 case-patients, including 3 with septicemia and 1 with meningitis; case numbers did not increase with time (1 in 2007, 2 in 2008, and 2 in 2009).