How Useful Is Whole Genome Sequencing to Predict Disease? 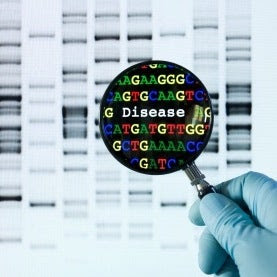 All in the genes? The genetic code can tell us a lot, but new research is looking for the limits of genome sequencing. It might never be able to tell us all that much about our likelihood of getting many common diseases. Image: iStockphoto/zmeel
A $1,000 genome sequence is close to being available. What will your sequence tell you about your actual risk for certain diseases?

Many companies advertise a laundry list of disease risks associated with your genes. But your genome is unlikely to reveal whether or not you will actually get one of these conditions, according to a study published online April 2 in Science Translational Medicine.

"Whole-genome testing is not a crystal ball," Bert Vogelstein, director of the Ludwig Center for Cancer Genetics and Therapeutics at Johns Hopkins University, and co-author of the new paper says. "It may become one important determinant in patient care, but certainly not the only one—and possibly not even a major one." Also, he doubts it will ever surpass more traditional tactics used by doctors to help shape care regimens, including preventative medicine and other information such as family history. Most common diseases, heart disease and stroke included, do not result from a single-point mutation—or even a combination of them; such diseases also involve one's own lifestyle and environmental exposures.

He and his fellow researchers examined genetic and health data from large existing registries of tens of thousands of identical twins. They searched for 24 common maladies, including some cancers, along with autoimmune, heart and neurological diseases. Although we do not yet have a perfectly clear picture of all of these conditions' potential genetic correlates, the researchers developed a model that acted as if we did already have that science down in an effort to test the upper boundaries of what we might be able to learn from the genome alone. If the tests were optimal in this way—and as Vogelstein says, presuming "that the interpreter of the genome would be omniscient" and already knew all of the potential links with these diseases—nine out of 10 people could get a tip-off about one or more of these two dozen diseases with robust enough results to be able to change their lifestyles or medical responses based on them.

But overall, based on their genome sequence alone, most people will wind up getting a "negative" (that is, "low risk") result for most diseases. "These negative test results will, in general, not be very informative," Vogelstein and his colleagues noted in their paper. Not only are low-risk readings less useful than high-risk ones (which could prompt lifestyle changes, more frequent screenings or prophylactic treatments) they also do not guarantee that an individual will not get a disease.

In fact, for about half of the diseases most of individuals from the registries who would have received a "low-risk" result from a whole-genome sequence would have ended up getting one of these diseases anyway. (Diseases that had a stronger link with the genome results included Alzheimer's disease, some autoimmune conditions, type 1 diabetes and, for men, heart disease.) And for most of the diseases the researchers studied, people who were classified as low-risk based on their genome still had a risk that was more than half that of the general population—thus, lower than average, but not exactly null.

"This level of risk reduction is probably not sufficient to warrant changes of behavior, lifestyle or preventative medical practices for these individuals," the researchers wrote.

Upside of negative news
Not all negative results are useless, however, some were relatively robust and could bring, if not a change in health behavior, at least some relief. Twins in the study whose genomes showed a low risk for Alzheimer's, for example, did have about a 12 percent (thus, much, much smaller) risk than that of the general population (which, to begin with, has a relatively small risk of getting Alzheimer's during their lifetimes). And that could be a big comfort, the researchers noted, "particularly to those with a family history of Alzheimer's disease."
Publicado por salud equitativa en 7:24