A study indicates that women who eat at least three servings a week of fish with omega-3 fatty acids have a lower risk of polyps that could develop into colon cancer. Vanderbilt University researcher Harvey Murff saw this in data on people who reported what they ate and who had colonoscopies – exams to check for polyps.
Murff says the findings could be another reason to eat fish with omega-3s, such as salmon and tuna:
"There’s already some good data that suggests that omega-3 fatty acids that come from fish help reduce somebody’s risk of having heart disease. And I think this study would suggest that you might also have a reduction in your risk of developing certain cancers." (13 seconds)
The report in the American Journal of Clinical Nutrition was supported by the National Institutes of Health.

URL of this page: http://www.nlm.nih.gov/medlineplus/colonicpolyps.html
Also called: Colon polyps
A polyp is an extra piece of tissue that grows inside your body. Colonic polyps grow in the large intestine, or colon. Most polyps are not dangerous. However, some polyps may turn into cancer or already be cancer.
To be safe, doctors remove polyps and test them. Polyps can be removed when a doctor examines the inside of the large intestine during a colonoscopy.

Anyone can get polyps, but certain people are more likely than others. You may have a greater chance of getting polyps if you
Most colon polyps do not cause symptoms. If you have symptoms, they may include blood on your underwear or on toilet paper after a bowel movement, blood in your stool, or constipation or diarrhea lasting more than a week. 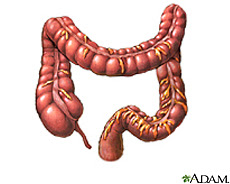