To determine the cause of an unprecedented outbreak of encephalitis among horses in New South Wales, Australia, in 2011, we performed genomic sequencing of viruses isolated from affected horses and mosquitoes. Results showed that most of the cases were caused by a variant West Nile virus (WNV) strain, WNVNSW2011, that is most closely related to WNV Kunjin (WNVKUN), the indigenous WNV strain in Australia. Studies in mouse models for WNV pathogenesis showed that WNVNSW2011 is substantially more neuroinvasive than the prototype WNVKUN strain. In WNVNSW2011, this apparent increase in virulence over that of the prototype strain correlated with at least 2 known markers of WNV virulence that are not found in WNVKUN. Additional studies are needed to determine the relationship of the WNVNSW2011 strain to currently and previously circulating WNVKUN strains and to confirm the cause of the increased virulence of this emerging WNV strain.
Figure 1 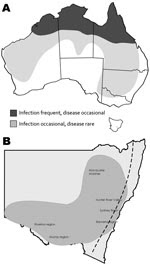 Figure 1. . . Known distribution of West Nile virus infection and disease caused by Kunjin strain (A) and distribution of encephalitis cases among equids (B), New South Wales, Australia, 2011. Dashed line...
In Australia, Murray Valley encephalitis virus (MVEV) and West Nile virus (WNV) Kunjin (KUN) strain are the main etiologic agents of arboviral encephalitis in humans, which usually occurs as isolated sporadic cases or occasional small outbreaks, mainly in northwestern Australia and rarely in southern regions (Figure 1, panel A) (1). MVEV is the more virulent pathogen and the only proven cause of fatal arboviral encephalitis in humans in Australia (2). WNVKUN infections are infrequent and less severe (3). Horses are also susceptible to these viruses and have been involved in WNV outbreaks elsewhere, most notably in the United States in an outbreak that began in 1999. In Australia, infection with WNVKUN has been detected intermittently in horses in the Southeast, but reports of encephalitis caused by this virus are rare (3). In New South Wales (NSW), Australia, the seroprevalence of WNVKUN in horses is <5% (P.D. Kirkland and A. Read, unpub. data); infection is confined to inland areas where flooding supports large mosquito populations and water birds are a reservoir and amplifying host. Even in years when WNVKUN has caused disease in humans, disease has rarely been observed or confirmed in horses (3,4).
In 2011, an outbreak of encephalitis occurred among horses in NSW. To analyze this strain of WNVKUN, we conducted genomic sequencing, antigenic profiling, in vitro growth kinetics, and mouse virulence studies on virus isolates from diseased animals and mosquitoes.
Publicado por salud equitativa en 8:53