National Report on Biochemical Indicators of Diet and Nutrition in the U.S. Population 2012 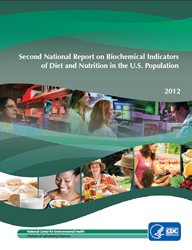 [PDF - 7.8MB] is part of a series of publications that provide ongoing assessment of the U.S. population’s nutrition status by measuring blood and urine concentrations of biochemical indicators (such as nutrients or a dietary indicator with potential health relevance).
Covering 58 biochemical indicators, CDC’s Second Report is the most comprehensive biochemical assessment of the nutritional status of the U.S. population – it shows us what the levels of nutrition indicators are actually in people – general population and selected groups such as children, women of childbearing age, and minorities.
The CDC’s Division of Laboratory Sciences in the National Center for Environmental Health conducted the laboratory analyses for the second report using data from The National Health and Nutrition Examination Survey (NHANES) 2003 to 2006. The report does not include a state-by-state breakdown on nutritional status. ...Learn more >>

Knowledge about biochemical indicators helps health experts make diet and nutrition recommendations to address disease and improve health. The Second Nutrition Report is part of a series of publications that provide ongoing assessment of the U.S. population’s nutrition status by measuring blood and urine concentrations.

The report presents information on 58 biochemical indicators in the U.S. population. CDC scientists measured these levels in the blood and urine of people who took part in CDC’s National Health and Nutrition Examination Survey (NHANES) during all or part of the four-year period from 2003 through 2006. The information is presented by age, sex, and race/ethnicity.
Some of the indicators used in this report include:
Access the Executive Summary

Purpose of the Second Nutrition Report

This report informs health scientists and policy makers about the levels of biochemical indicators of diet and nutrition in the U.S. population and in selected population groups such as children and women of childbearing age. These data help physicians, scientists, and public health officials assess inadequate or excess intake of specific nutrients. The report also helps:

The measurements presented in this report are the result of cumulative intakes from Biochemical indicators measured in blood and urine can also be influenced by factors other than diet, such as various diseases.
This report presents reference information on selected biochemical indicators. Differences between population subgroups can be assessed by identifying groups with non-overlapping confidence intervals. A confidence interval is a range around a measurement that conveys how precise the measurement is.
It is beyond the scope of this report to explore the reasons for differences in observations derived from descriptive analyses. Also, the current study design does not permit CDC to estimate biochemical indicators by state or by city. For example, CDC cannot extract a subset of data and examine levels of folate in a particular state or city.
Publicado por salud equitativa en 9:28