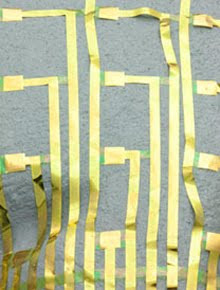 The flexible, ribbon-like electrodes wrapped onto a model of the brain. Image courtesy of J Rogers and C Conway, University of Illinois.The simplest devices for recording from the brain are needle-like electrodes that can penetrate into brain tissue. More state-of-the-art devices, called micro-electrode arrays, consist of dozens of semi-flexible wire electrodes. These are usually fixed to rigid silicon grids that don’t conform to the brain's shape. An ideal recording device would conform to complex curved surfaces while placing minimal stress on the tissue.

The scientists chose silk as their base material. Silk is flexible and durable enough to withstand manipulation. It can be engineered to avoid activating the immune system and also to dissolve at different rates, from almost immediately after implantation to years later.

The researchers began with arrays of 30 electrodes laid in a 5x6 pattern on an ultrathin mesh of polyimide (a type of flexible plastic). They transferred arrays of varying thickness onto silk films. They then tested the arrays on complex objects, brain models and ultimately in the brains of living, anesthetized animals.

The team reported in the advanced online edition of Nature Materials on April 18, 2010, that they were able to create ultrathin flexible implants that hug the brain like shrink wrap, collapsing into its grooves and stretching over its rounded surfaces. The silk base dissolves once it makes contact with the brain, allowing the array to end up tightly hugging the brain.

The researchers tested the implants in anaesthetized cats, recording signals from the brain’s visual center in response to visual stimulation. They found that the ultrathin arrays they created can record brain activity more faithfully than thicker implants embedded with similar electronics.

"These implants have the potential to maximize the contact between electrodes and brain tissue, while minimizing damage to the brain," says NINDS Deputy Director Dr. Walter Koroshetz. "They could provide a platform for a range of devices with applications in epilepsy, spinal cord injuries and other neurological disorders."

For example, in people with epilepsy, the technology might be used to detect when seizures first begin and to deliver pulses to shut the seizures down. In people with spinal cord injuries, the arrays could potentially read the complex signals in the brain that direct movement, and then route those signals to healthy muscles or prosthetic devices.

The researchers are now working to design implants that are more densely packed with electrodes to achieve higher resolution recordings.