Health Care Use May Account for Colorectal Cancer Disparities
Higher rates of colorectal cancer incidence and death among African-Americans may be driven less by biology and more by differences in health care use, according to a new study. 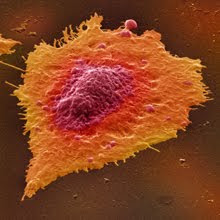 Image of a human colon cancer cell. Image by Annie Cavanagh. All rights reserved by Wellcome Images.Colorectal cancer disproportionally affects African-Americans in the United States. From 2002 to 2006, the average annual incidence rate for colorectal cancer was about 49 per 100,000 for white men and women, compared to 60 per 100,000 for black men and women. The annual death rates were about 18 and 25 per 100,000, respectively.

Some researchers have suggested these differences may be related to health care access. However, studies have found that black people tend to develop colorectal cancer at an earlier age. They are also more likely to be diagnosed with advanced colorectal cancer, which is more difficult to treat and has worse survival outcomes.

At the start of the study, participants were offered a screening flexible sigmoidoscopy, which is used to examine the lower, or sigmoid, part of the colon. People who had polyps or lesions detected during the sigmoidoscopy were referred to their personal physician for follow-up colonoscopy, in which the entire colon is examined. The costs of the colonoscopies weren't covered by the study.

In the April 21, 2010, Journal of the National Cancer Institute, the team reported that black and white people were equally likely to need a follow-up colonoscopy after a screening sigmoidoscopy, but black people were less likely to actually receive the follow-up.

The groups didn’t differ significantly in the presence of pre-cancerous lesions or cancer. About 24% of the white participants and 26% of the black participants had abnormal results from the screening sigmoidoscopy, such as polyps or lesions. However, 72% of the white but only 63% of the black people received a follow-up colonoscopy. Lower rates of follow-up could lead to delayed diagnosis and treatment, and higher mortality.

The reasons behind lower follow-up rates among black people in the study are unknown. The cost of follow-up care may have been a factor, but the authors didn’t have direct information on socioeconomic status. One sign that socioeconomics may have played a role is that the overall education level among black participants was lower.

"Our research suggests that the biology of colorectal cancer may not differ by race, at least in the early stages of tumor development," Laiyemo says. "Instead, health care utilization differences among races may play a more important role in colorectal cancer disparities."

"This research suggests that targeting interventions toward increasing the use of screening among minority populations might go a long way toward reducing disparities in colorectal cancer," Berg says.