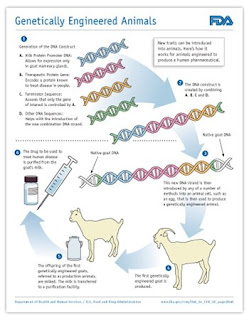 New traits can be introduced into animals. Here's how it works for animals engineered to produce a human pharmaceutical.

1. Generation of the DNA Construct

A. Milk Protein Promoter DNA: allows for expression only in goat mammary glands.

B. Therapeutic Protein Gene: encodes a protein known to treat disease in people.

C. Terminator Sequence: assures that only the gene of interest is controlled by A.

D. Other DNA Sequences: helps with the introduction of the new combination DNA strand.

2. The DNA construct is created by combining A, B, C and D.

3. This new DNA strand is then introduced by any of a number of methods into an animal cell, such as an egg, that is then used to produce a genetically engineered animal.

5. The offspring of the first genetically engineered goats, referred to as production animals, are milked. The milk is transferred to a purification facility.

6. The drug to be used to treat human disease is purified from the goat's milk.

For More Information:
For FDA publications about the technology of GE animals and the FDA's regulation of them, visit www.fda.gov/cvm/GEAnimals.htm

The guidance is aimed at industry; however, FDA believes it may also help the public gain a better understanding of this important and developing area. The guidance explains the process by which FDA is regulating GE animals.

FDA invited public comments for 60 days after the release of its draft guidance on regulating GE animals in September 2008. The agency received comments from groups and individuals ranging from consumers and animal advocates, to food producers and trade associations, to academics and researchers. FDA considered the approximately 28,000 public comments in producing the final guidance.

Genetic Engineering
Genetic engineering is a process in which scientists use recombinant DNA (rDNA) technology to introduce desirable traits into an organism. DNA is the chemical inside the nucleus of a cell that carries the genetic instructions for making living organisms. Scientists use rDNA techniques to manipulate DNA molecules.

Genetic engineering involves producing and introducing a piece of DNA (the rDNA construct) into an organism so new or changed traits can be given to that organism. The rDNA construct can either come from another existing organism, or be synthesized in a laboratory. Although conventional breeding methods have been used for a long time to select for desirable traits in animals, genetic engineering is a much more targeted and powerful method of actually introducing specific desirable traits into animals.

Health protection of animals – Animals are under development to be more resistant to very painful and harmful diseases, such as infection of the udder (mastitis) in dairy cows and "mad cow" disease (bovine spongiform encephalopathy) in all cattle.
New source of medicines – Animals can be engineered to produce particular substances, such as human antibodies, to make infection-fighting drugs for people. These "biopharm" animals can change the way we treat chronic diseases, such as bleeding disorders, by providing large quantities of safe, health-restoring proteins that previously were available only from human cadavers.
Transplantation – Pigs are being engineered so that their cells, tissues, or organs could be transplanted into humans with a reduced risk of immune rejection.
Less environmental impact – Food animals are being engineered to grow more quickly, require less feed, or leave behind less environmentally damaging waste.
Healthier food – Food animals, such as pigs, are under development to contain increased levels of omega-3 fatty acids, providing a more healthful product. Livestock can also be engineered to provide leaner meat or more milk. 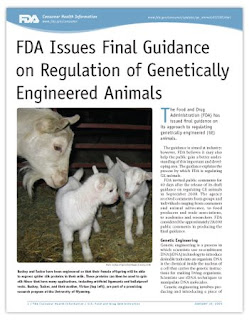 GE Animals Regulated Under New Animal Drug Provisions
FDA regulates GE animals under the "new animal drug" provisions of the Federal Food, Drug, and Cosmetic Act (FFDCA), and the agency must approve them before they are allowed on the market. The FFDCA defines a drug as "an article (other than food) intended to affect the structure or any function of the body of man or other animals." Therefore, the rDNA construct is a drug because it is intended to change the structure or function of the body of the GE animal.

FDA will review food and animal feed from GE animals before the food or feed can be marketed. "We want the public to understand that food from GE animals will not enter the food supply unless FDA has determined that it is safe," says Bernadette Dunham, D.V.M., Ph.D., the director of FDA's Center for Veterinary Medicine.

FDA may exercise "enforcement discretion" over some GE animals, based on their potential risk and on a case-by-case basis. This means that the agency may not require premarket approval for a low-risk animal. For example, the agency is not requiring premarket approval for GE lab animals used for research, and did not require approval of a GE aquarium fish that glows in the dark. FDA does not expect to exercise enforcement discretion for animal species traditionally consumed as food.

The guidance will help industry comply with FDA's requirements and will help the public understand FDA's oversight of GE animals and food from such animals.

Genetic engineering is a targeted and powerful method of introducing desirable traits into animals using recombinant DNA (rDNA) technology. DNA is the chemical inside the nucleus of a cell that carries the genetic instructions for making living organisms.

In January, 2009, the Food and Drug Administration issued a final guidance for industry on the regulation of genetically engineered (GE) animals. The guidance explains the process by which FDA is regulating GE animals and provides a set of recommendations to producers of GE animals to help them meet their obligations and responsibilities under the law. While the guidance is intended for industry, FDA believes it may also help the public gain a better understanding of this important and developing area.