Public Health England (PHE; London, England, UK) has legal permission under Regulation 3 of the Health Service (Control of Patient Information) Regulations 2002 (http://www.legislation.gov.uk/uksi/2002/1438/regulation/3/madeExternal Link) to conduct national surveillance of communicable diseases. This regulation also provides PHE permission to access information required to monitor the safety and effectiveness of vaccines.
PHE conducts surveillance for IPD and provides a national reference service for serotyping pneumococcal isolates in England and Wales (12). Staff of the National Health Service laboratories electronically report invasive bacterial infections to PHE by using the Second Generation Surveillance System, which replaced LabBase2 in 2014, and routinely submit all invasive pneumococcal isolates to the PHE national reference laboratory for confirmation and serotyping (12). PHE staff actively follow up on reported cases when they do not receive an accompanying isolate. Case ascertainment has remained consistently high, especially for meningitis cases; >90% of invasive pneumococcal isolates are submitted to PHE for serotyping (12). Starting in September 2006, IPD surveillance was enhanced by the collection of 1-page surveillance questionnaires completed by the patient’s general practitioner; questionnaires asked for information on patients’ vaccination histories, underlying medical conditions, and outcomes.

We exported anonymized (mainly descriptive) data to Stata v.11.0 (https://www.stata.comExternal Link) for analysis. We included laboratory-confirmed cases of pneumococcal meningitis diagnosed during July 1, 2000–June 30, 2016 (16 epidemiologic years). We defined meningitis as identification of S. pneumoniae in cerebrospinal fluid or blood cultures of patients with a clinical diagnosis of meningitis, as designated on their electronic report or sample submission form sent to PHE. Excluding clinically diagnosed cases in which S. pneumoniae was not confirmed in the cerebrospinal fluid (25%–35% of all pneumococcal meningitis cases annually) reduced the total number of meningitis cases available for analysis without affecting the observed trends over time. We identified fatal cases and dates of death through the patient demographic service and calculated the 30-day CFR.
We classified cases into 4 groups by serotype: PCV7 (serotypes 4, 6B, 9V, 14, 18C, 19F, 23F), additional PCV13 (serotypes 1, 3, 5, 6A, 7F, 19A), non-PCV13, and unknown (typically resulting from lack of referral or unsuccessful recovery from culture after sample transport). We analyzed cases as a whole and by patient age group (<5, 5–64, >65 years). We filled in missing age and serotype by assuming that age and serotype distribution were the same on reports with missing information as on reports for which these parameters were known. We obtained age-specific population denominators from the Office for National Statistics (www.statistics.gov.ukExternal Link) and compared the adjusted annual incidence rates for pneumococcal meningitis in epidemiologic year 2015–16 with rates for the pre-PCV7 (July 1, 2000–June 30, 2006) and pre-PCV13 (July 1, 2008–June 30, 2010) periods by age and serotype group, assuming a Poisson distribution.
For cases diagnosed during the PCV13 period (July 1, 2011–June 30, 2016), we used multivariable logistic regression to calculate the odds of meningitis (vs. nonmeningitis) for individual serotypes (vs. all other serotypes) after adjusting for age group and surveillance year. We also used multivariable logistic regression to calculate the odds of death by clinical presentation (meningitis vs. nonmeningitis) after adjusting for age group and surveillance year. For meningitis cases, we used multivariable logistic regression to assess the odds of death by age group, serotype group, individual serotype (vs. all other serotypes), and surveillance year after adjusting for age group and surveillance year. Because of multiple comparisons, we considered p<0.01 to be significant. We estimated the cases prevented according to age group by determining the difference between the expected (average corrected number of cases in absence of vaccination) and observed numbers of cases after the introduction of each vaccine.
Top 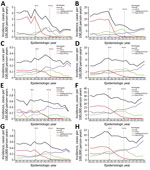 Cases in Patients <5 Years of Age

Cases in Patients 5–64 Years of Age

Cases in Patients >65 Years of Age