By Yolanda Smith, BPharm
Modern lifestyle and the demands that it brings have affected the sleep schedule of many people around the world. The American Academy of Sleep Medicine has declared that there are more than 50 kinds of sleep disorders. Sleep deprivation is the initial stage of such disorders, affecting all people irrespective of age, race, or ethnicity and includes sleeplessness and disorders of the circadian sleep-wake cycle. 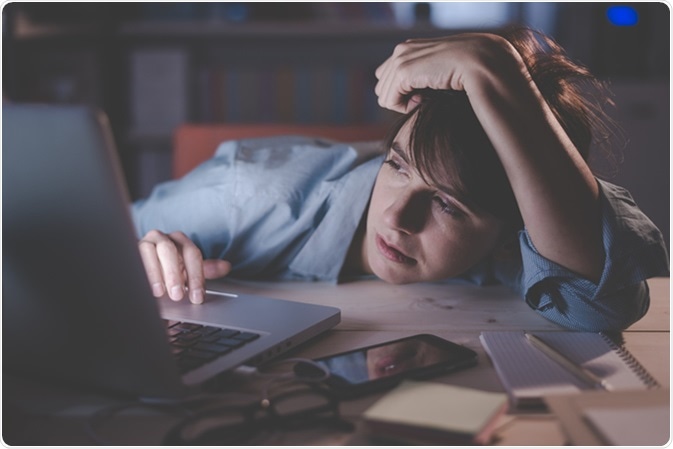 Image Credit: Stokkete / Shutterstock
Long-term inadequate sleep quality and quantity can lead to chronic sleep deprivation. The amount of sleep that humans require changes throughout the different stages of life; on an average, an adult needs 7–9 hrs of continuous sleep, while a child needs much more and older people often require slightly less.
Sleeping less than the specified hours can have major consequences on health like risks of heart disease, kidney disease, high blood pressure, diabetes, obesity, and emotional disorders.

Some early signs of sleep deprivation are people who fall asleep very quickly, take frequent naps, doze off without meaning to, or sleep for very long hours during the weekend. There are several factors that may lead to sleep deprivation, and certain groups of people have a higher risk than others, because of the following reasons:

Although sleep deprivation is estimated to affect one out of three people, it is not easily diagnosed. The spoon test or the Sleep onset latency test is a very simple home test used to diagnose sleep deprivation.This test was created by the late Dr Nathaniel Kleitman from the University of Chicago, who is famously known as the “father of sleep research.”

This test is to be carried out only during the daytime. Darken the bedroom and then lie down at the edge of the bed. Keep a metal tray on the floor beside the bed and hold a metal spoon over it. The individual should note the time and close their eyes as if to sleep.
When the individual falls asleep, the hand will loosen its grip over the spoon and it will come crashing down onto the tray, waking them up. Immediately look at the watch and note how much time has passed.

If they have fallen asleep within 5 min, they are most likely severely sleep deprived; if it took 10 min to fall asleep, they likely need more sleep than you are now getting; however, if they were awake for 15 min or more before falling asleep, they are probably getting adequate good sleep regularly.

The test indicates that falling asleep too quickly during the day is not a very good sign. Even at night, sleeping off immediately after lying on the bed is a symptom of sleep deprivation. It is said that a person who gets to sleep after more than 20 min of lying in bed has adequate sleep.

This is a very simple test through which one can determine the quality of sleep one has and decide whether serious treatment is needed. Lack of sleep can be a result of physical or mental weakness and can lead to serious health issues. Therefore, it is advisable to prevent worsening of the condition than to cure it.

In the test, there is always the chance that the spoon misses the tray and falls outside it. In such cases, one may not wake up by the sound created by the spoon and will not be able to record the timing accurately, which leads to the failure of the experiment.

Dr. Michael Mosley, a physician as well as a journalist for BBC suggests a simpler alternative to the problem of “spoon missing the tray.” He advises setting an alarm for 15 min so that one can note whether sleep happens within that time. As mentioned above, 15 min is a safe time and if one crosses this limit without falling asleep, the conclusion is a positive one.