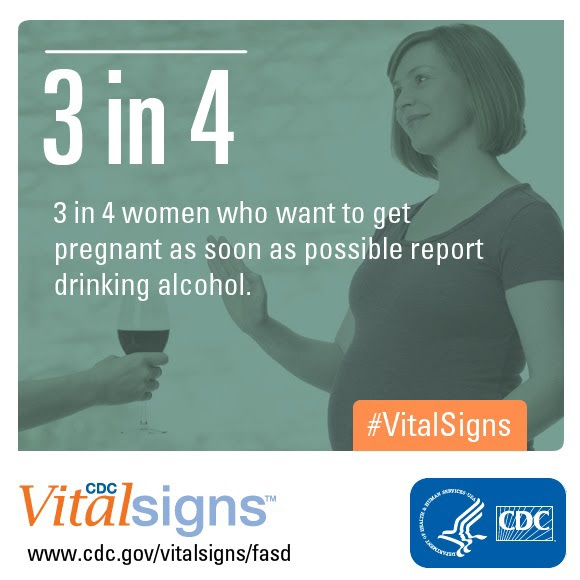 An estimated 3.3 million women between the ages of 15 and 44 years are at risk of exposing their developing baby to alcohol because they are drinking, sexually active, and not using birth control to prevent pregnancy, according to the latest CDC Vital Signs report released today. The report also found that 3 in 4 women who want to get pregnant as soon as possible do not stop drinking alcohol when they stop using birth control.Alcohol use during pregnancy, even within the first few weeks and before a woman knows she is pregnant, can cause lasting physical, behavioral, and intellectual disabilities that can last for a child’s lifetime. These disabilities are known as fetal alcohol spectrum disorders (FASDs). There is no known safe amount of alcohol – even beer or wine – that is safe for a woman to drink at any stage of pregnancy.“Alcohol can permanently harm a developing baby before a woman knows she is pregnant,” said CDC Principal Deputy Director Anne Schuchat, M.D. “About half of all pregnancies in the United States are unplanned, and even if planned, most women won’t know they are pregnant for the first month or so, when they might still be drinking. The risk is real. Why take the chance?”


CDC works to prevent alcohol-exposed pregnancies and FASDs through a variety of activities including: