Cholesterol in Eggs May Not Hurt Heart Health: Study: MedlinePlus

Cholesterol in Eggs May Not Hurt Heart Health: Study: MedlinePlus

Cholesterol in Eggs May Not Hurt Heart Health: Study 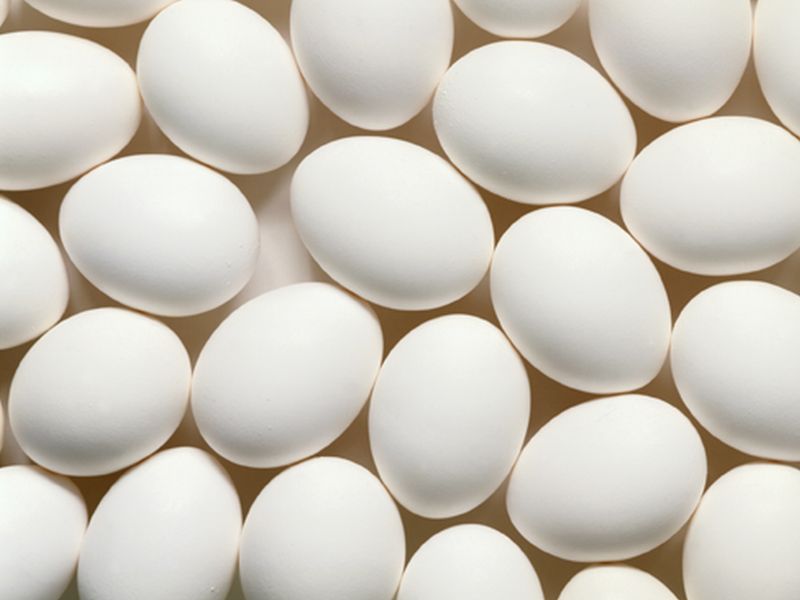 TUESDAY, Feb. 16, 2016 (HealthDay News) -- The once-maligned egg may not be a heartbreaker after all, new research suggests.
Finnish researchers say that even carriers of a gene -- called APOE4 -- that increases sensitivity to dietary cholesterol don't seem to have anything to fear when it comes to the impact of eggs, or any other dietary cholesterol, on heart health.
The findings followed the 20-year plus tracking of dietary habits among more than 1,000 middle-aged Finnish men. All were heart healthy at the study's start, and about a third carried the APOE4 gene, the researchers said.
"It is quite well known that dietary cholesterol intake has quite a modest impact on blood cholesterol levels, and cholesterol or egg intakes have not been associated with a higher risk of heart disease in most studies," said study author Jyrki Virtanen. He is an adjunct professor in nutritional epidemiology with the University of Eastern Finland Institute of Public Health and Clinical Nutrition in Kuopio, Finland.
"However, dietary cholesterol intake has a greater impact on blood cholesterol levels among those with [APOE4]," Virtanen added. "So it was assumed that cholesterol intake might have a stronger impact on heart disease risk among those people. However, our study did not find an increased risk even among those carrying [APOE4]."
Although the study didn't find a link between dietary cholesterol and adverse heart health, the study authors said they weren't able to prove that dietary cholesterol doesn't have a significant impact on cardiovascular disease. For example, one limitation of the study the authors noted was that they only collected dietary information at the start of the study, and had no way of knowing if people's diets changed over time.
Virtanen and his colleagues report their findings in the Feb. 10 issue of the American Journal of Clinical Nutrition. The University of Eastern Finland provided funding for the study, and Virtanen added that there was no funding from egg industry sources.
Finland has a higher-than-average number of APOE4 carriers, with about a third of the population affected, the researchers said. But little is known about whether or not dietary cholesterol intake might affect the hearts of people with the APOE4 gene, the study authors noted.
The new research included people between the ages of 42 and 60. On average, the average dietary cholesterol consumed was 398 milligrams (mg), the study found. No one reported consuming more than one egg per day, on average. One medium-sized egg has approximately 200 mg of cholesterol, the study authors said.
At the end of the 21-year tracking period, 230 of the men had experienced a heart attack. But, the study authors determined that neither egg habits, nor overall cholesterol consumption, had any bearing on heart attack risk or the risk for hardening of the arterial walls.
Virtanen noted that none of the research participants had heart disease or diabetes at the study's launch. "[And] there is some study data from other study populations that egg or cholesterol intakes may increase the risk of heart disease among diabetics," he said. "So our study is not a 'license' to eat as much cholesterol or eggs as one likes."
He added that "there might well be a point when cholesterol or egg intakes may become so high that they may increase the risk of heart disease. However, in our study we could not assess what might be too much, because we did not have enough people with extremely high intakes."
Lona Sandon is a registered dietitian and assistant professor of clinical nutrition at the University of Texas Southwestern Medical Center at Dallas. She said that while "everything in moderation" is the way to go, "people can feel confident about adding eggs, including the yolk, into their daily diet."
"Eggs are a powerhouse of nutrition," she said, "with much of that nutrition found in the yolk. The yolk has vitamin D, essential fats, choline, lutein, zeaxanthin, and more. Good for bones, good for the brain, and good for the eyes. [And] the white is a high quality protein, as well as a source of B vitamins."
Dietary cholesterol doesn't have as much of an impact on blood cholesterol levels as was previously thought, Sandon added. She also noted that the American Heart Association dropped its daily cholesterol limit recommendations years back. Instead, saturated fat and sugars are a more likely culprit in terms of heart disease risk, she said, alongside insufficient exercise.
"[So] an egg a day in the context of a healthy diet pattern does not appear to pose a risk for heart disease or impact dietary cholesterol according to current research," she said. "[But] an egg a day on top of buttery biscuits and gravy is not the way to go."
SOURCES: Jyrki Virtanen, Ph.D., adjunct professor, nutritional epidemiology, University of Eastern Finland Institute of Public Health and Clinical Nutrition, Kuopio, Finland; Lona Sandon, R.D.. assistant professor, clinical nutrition, University of Texas Southwestern Medical Center at Dallas; Feb. 10, 2016, American Journal of Clinical Nutrition
HealthDay
Copyright (c) 2016 HealthDay. All rights reserved.