Looking at Ebola virus particles more than 100,000 times their size under electron microscopes is routine for CDC’s Division of High-Consequence Pathogens and Pathology (DHCPP) laboratorians in Atlanta. But when those same laboratorians are in Africa supporting Ebola outbreak responses, they get a closer and sobering view of Ebola as they witness firsthand the suffering and deaths caused by this virus.

When the Ebola outbreak in West Africa began in spring 2014, laboratorians in DHCPP’s Viral Special Pathogens Branch were well prepared with the unique familiarity of the Ebola virus that comes from years of laboratory research and lessons learned from past field laboratory responses. The team of Ute Ströher, Tara Sealy, and Michael Flint first set up a field laboratory in Kenema, Sierra Leone, where it operated for approximately 6 weeks. In August, DHCPP’s lab team led by Jon Towner and Brian Bird, along with laboratorians from across CDC, rebuilt the lab in Bo, where it tested an average of 100 samples per day. Since then, the laboratory has conducted diagnostics on more than 9,000 specimens collected from throughout the country.
Simple straight-forward procedures combined with automated robotic instruments for higher sample throughput and experienced experts contribute to the success of the lab. Familiar with the electricity challenges associated with field labs the CDC team brought equipment that can tolerate unstable power and use refrigerators/freezers that can be run off multiple types of power sources. While some field labs rely on manual extraction of RNA using microfuges, the CDC field lab benefits from two magnetic bead-based extraction robots: one that processes 15 samples and another that processes 96 samples, each in less than 30 minutes.
Word got out about the lab’s success, and lab professionals from around the world wanted to see how it worked. In response, Tara Sealy, the Bo lab team lead in mid-November, provided tours of the lab and explained its processes to other Sierra Leone field lab managers from the governments of South Africa and China and from the Public Health Service of England. All were impressed by how simple and effective the lab was. Simplifying the processes leaves less room for error and allows the four-member team to efficiently divide and complete tasks. To further build in-country lab capacity, Sealy trained the South African lab team in Sierra Leone to use similar extraction robots provided by CDC.

Keeping up with the Epidemic

Each day, samples come from hospitals, Ebola Treatment Units, and holding centers (designated shelters where suspected patients await test results while isolated from the rest of the communities). Samples come from sick people suspected to have Ebola, from those in treatment or isolation, and from corpses.
The importance of quick and accurate diagnostics cannot be understated. Samples determined to be positive for Ebola require immediate action to increase the individual’s likelihood of survival and to prevent transmission to the family, healthcare workers, and the community. But the often long and hazardous travel by road to deliver specimens can cause delays. During one week in October, there were two car accidents involving ambulances carrying samples. Samples are also at risk of getting lost along the way and come into the lab in ways that were potentially dangerous for the carriers and laboratorians: in coffee cans, plastic bags, and rubber gloves.
To address these problems, Bobbie Rae Erickson, a Bo lab team lead, and Michael Staley, logistician for the CDC Sierra Leone team, took action. Erickson procured 500 AirSea safe specimen transport containers. She also developed an accompanying infographic to provide instructions on proper use of the containers for users with varying levels of English literacy. Staley spearheaded the distribution of the transport kits to Ebola Treatment Units and communities where suspect patients may be isolated in holding centers. This new, safer method of transport lead to an agreement with the UN to transport these now safely encased specimens on helicopter fights three days per week and to protect those delivering and collecting samples. 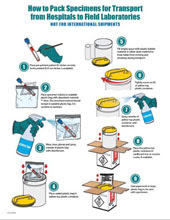 During the first week in December 2014, Towner and Stuart Nichol used nitrogen shippers and a chartered jet to retrieve 4,900 infectious specimens from the Bo lab along with 1,900 from Liberia and 7,000 non-infectious RNAs. These specimens will be used to improve diagnostics for the current outbreak in West Africa and to study how the Ebola virus has evolved since the start of the outbreak.
After this outbreak ends, DHCPP laboratorians will continue to study a disease most people have never heard of or do not want to think about. And when the next outbreak occurs they will be even better prepared to get back into the field and bring science into action.
Publicado por salud equitativa en 6:18