A new book from NASA is showing how research aboard the International Space Station helps improve lives on Earth while advancing NASA's ambitious human exploration goals.
NASA will release “Benefits for Humanity” online and in print at the fourth annual International Space Station Research and Development Conference, which is being held Tuesday through Thursday in Boston. The book highlights benefits in a number of key areas including human health, disaster relief andeducation programs to inspire future scientists, engineers and space explorers. 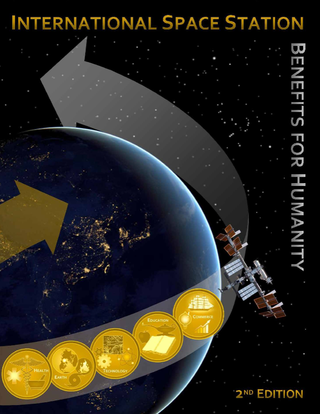 NASA's "Benefits for Humanity” book highlights International Space Station research off the Earth for the Earth that improves lives.
Credits: NASA
"Some 250 miles overhead, astronauts are conducting critical research not possible on Earth, which makes tremendous advances in our lives while helping to expand human presence beyond low Earth orbit," said William Gerstenmaier, NASA associate administrator for Human Exploration and Operations. "Since 2012, this research has been carried to orbit by our U.S. commercial cargo providers Orbital ATK and SpaceX. Both companies will return to flight soon, having learned from recent challenges to perform even stronger. In the next few years, SpaceX and Boeing will send our crews to orbit from the United States, increasing the size of space station crews to seven, doubling the amount of crew time to conduct research for all of humanity."
The space station, which has been continuously occupied since November 2000, has been visited by more than 200 people and a variety of international and commercial spacecraft. It is an unprecedented success in global cooperation to build and operate a research platform in space. In a partnership between five member space agencies representing 15 countries, it advances a unified goal to utilize the orbiting laboratory for the betterment of humanity. The partner agencies include NASA, the Russian Federal Space Agency (Roscosmos), the Japan Aerospace Exploration Agency (JAXA), the European Space Agency (ESA) and the Canadian Space Agency (CSA).
"People do not realize how much their lives today have been made better by the space station," said Julie Robinson, NASA International Space Station chief scientist. "You would be surprised to know that station research has resulted in devices that can help control asthma and sensor systems that significantly improve our ability to monitor the Earth and respond to natural hazards and catastrophes, among many other discoveries."
Scientists use the Japanese Experiment Module (JEM), also known as Kibo, to research effective drugs that may improve the lives of patients suffering around the globe.
"The International Space Station and Kibo remind me of a computer," said Kazuyuki Tasaki, deputy director of the JAXA JEM Utilization Center. "After being invented, the computer disseminated diverse public knowledge applicable in many fields, such as computing, simulation, word processing, games and the Internet. The space station and Kibo also offer huge potential for benefitting humankind."
Since 2010, the Vessel-ID System, installed on ESA’s Columbus module, has improved the ship tracking ability of coast guards around the world and even aided rescue services for a lone shipwreck survivor stranded in the North Sea.
"The International Space Station with its European Columbus laboratory is steadily producing lots of important research results which are relevant for many areas of life on Earth," said Martin Zell, head of ESA’s Space Station Utilisation and Support. "Experimental demonstration of new technologies, as well as the interaction between astronauts and younger generations on Earth for educational activities are invaluable benefits from the permanent human space laboratory in low-Earth orbit."
CSA’s robotic heavy-lifters aboard the space shuttle and station, Canadarm, Canadarm2 and the Special Purpose Dexterous Manipulator (Dextre), inspiredmedical technology that is changing the lives of patients on Earth.
"Technologies developed for the assembly and maintenance of the station are helping to save lives here on Earth," said Nicole Buckley, CSA chief scientist, Life Sciences and ISS utilization. "The Canadian robotics system that helped build and now operates on the International Space Station has led to tools that give doctors new ways to detect cancer, operate on sick children, and perform neurosurgery on patients once considered to be inoperable."
In addition to the updated benefits book, NASA released its third iteration of the International Space Station Reference Guide, which explains what the space station does and how it works. This release focuses on the station’s capabilities to perform pioneering science in its microgravity environment. To date, 83 countries have taken part in more than 1,700 experiments and educational efforts on this world-class laboratory in space.
The Center for the Advancement of Science in Space (CASIS), who is hosting the conference in cooperation with the American Astronautical Society and NASA, is releasing a new research-focused, interactive website that provides tools, information and resources to give researchers a competitive edge sending new investigations to the space station. Visit the website at:
http://SpaceStationResearch.com
For more information about the International Space Station and research aboard the orbiting laboratory, visit:
http://www.nasa.gov/station
Live-streaming of the International Space Station Research and Development Conference is available at:
http://www.issconference.org
-end-
Trent J. PerrottoHeadquarters, Washington202-358-0321trent.j.perrotto@nasa.gov
Dan HuotJohnson Space Center, Houston281-483-5111daniel.g.huot@nasa.gov
Editor: Sarah Ramsey
Publicado por salud equitativa en 10:39