Fungal infections that are resistant to treatment are an emerging public health problem, but everyone has a role in preventing these infections and reducing antifungal resistance. 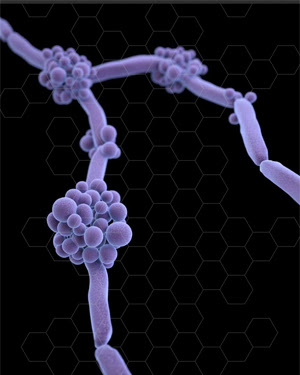 Medical illustration of fluconazole-resistant Candida
Invasive fungal infections cause substantial morbidity and mortality and are a costly, common problem in healthcare settings. The fungus Candida is the most common cause of healthcare-associated bloodstream infections in the United States.1 Each case of Candida bloodstream infection (also known as candidemia) is estimated to result in an additional 3 to 13 days of hospitalization and $6,000 to $29,000 in healthcare costs.2 What’s also concerning is that some types of Candida are becoming increasingly resistant to first-line and second-line antifungal medications, namely, fluconazole and echinocandins (anidulafungin, caspofungin, and micafungin). Approximately 7% of all Candida bloodstream isolates tested at CDC are resistant to fluconazole, most of which are Candida glabrata.3,4  CDC’s surveillance data indicate that the proportion of Candida isolates that are resistant to fluconazole has remained fairly constant over the past twenty years.4-6 In contrast, echinocandin resistance appears to be on the rise, with approximately 1% of all Candidaisolates tested at CDC showing echinocandin resistance.3
The stable yet substantial rates of fluconazole resistance and the emergence of echinocandin resistance are concerning because echinocandins are typically used to treat infections caused by C. glabrata, the species that’s most often associated with fluconazole resistance. For multi-drug resistantCandida infections (those that are resistant to both fluconazole and an echinocandin), the few remaining treatment options are expensive and can be toxic for patients who are already very sick. Not surprisingly, there is growing evidence to suggest that patients who have drug-resistant candidemia have poorer outcomes than patients who have candidemia that’s susceptible to antifungal medications.7,8 Overall, antifungal resistance is still relatively uncommon, but the problem will likely continue to evolve unless more is done to prevent further resistance from developing and prevent the spread of these infections.

Some species of fungi are naturally resistant to certain types of antifungal medications. Other species may be normally susceptible to a particular type of medication, but develop resistance over time as a result of improper antifungal use—for example, dosages that are too low or treatment courses that aren’t long enough.9,10  Some studies have indicated that antibacterial medications may also contribute to antifungal resistance; this could occur for a variety of reasons, one of which is that antibacterials reduce bacteria in the gut and create favorable conditions for Candida growth.11 It’s not yet known if decreasing the use of all or certain antimicrobial agents can reduce Candida infections, but appropriate use of antibacterial and antifungal agents is one of the most important factors in fighting drug resistance.
Top of Page

What can be done