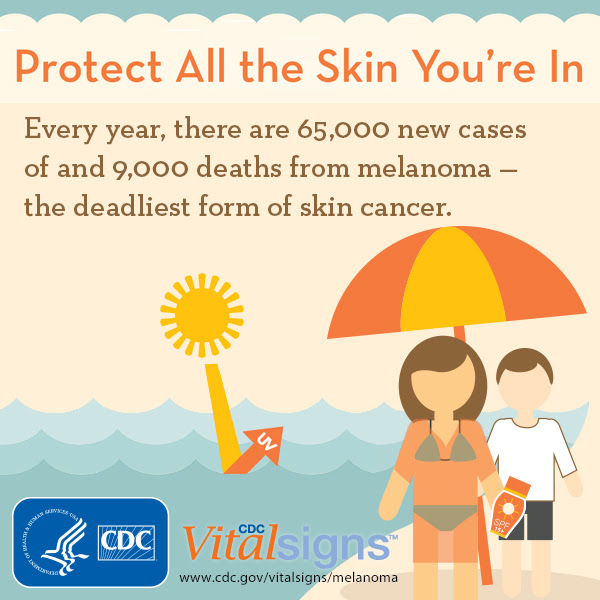 Melanoma rates doubled between 1982 and 2011 but comprehensive skin cancer prevention programs could prevent 20 percent of new cases between 2020 and 2030, according to this month’s Vital Signs report.
Skin cancer is the most common form of cancer in the U.S., and melanoma is the most deadly type of skin cancer. More than 90 percent of melanoma skin cancers are due to skin cell damage from ultraviolet (UV) radiation exposure. Melanoma rates increased from 11.2 per 100,000 in 1982 to 22.7 per 100,000 in 2011. The report notes that without additional community prevention efforts, melanoma will continue to increase over the next 15 years, with 112,000 new cases projected in 2030. The annual cost of treating new melanoma cases is projected to nearly triple from $457 million in 2011 to $1.6 billion in 2030.
“Melanoma is the deadliest form of skin cancer, and it’s on the rise,” said CDC Director Tom Frieden, M.D., M.P.H. “Protect yourself from the sun by wearing a hat and clothes that cover your skin. Find some shade if you’re outside, especially in the middle of the day when the dangerous rays from the sun are most intense, and apply broad-spectrum sunscreen.”
Vital Signs is a monthly report that appears as part of the CDC journal, Morbidity and Mortality Weekly Report.

More than 9,000 Americans die of melanoma each year.

Using proven community prevention programs could avoid an estimated 21,000 new melanoma cases each year.
Skin cancer is the most common form of cancer in the US. In 2011, there were more than 65,000 cases of melanoma, the most deadly form of skin cancer. Melanoma can spread to other parts of the body and causes over 9,000 deaths every year. People who die of melanoma lose an average of 20 years of life expectancy. Melanoma can be caused by too much exposure to ultraviolet (UV) rays from sun or sources such as indoor tanning. Without additional prevention efforts, melanoma will continue to increase in the next 15 years. Communities and policy makers play a major role in these skin cancer prevention efforts.
Communities and policymakers can:

What Can Be Done collapsed

Science Behind the Issue collapsed