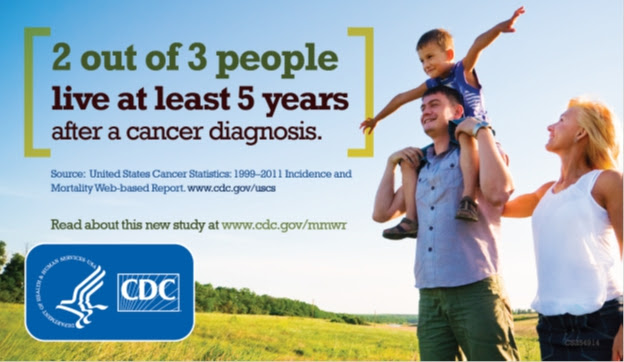 About 1.5 million new cases of cancer were reported in the United States in 2011, according to the new report, Invasive Cancer Incidence and Survival—United States, 2011, released today. The rates of getting cancer were higher among men than women, highest among black people, and varied by state from 374 to 509 per 100,000 people. The most common kinds of cancer are prostate, female breast, lung, and colorectal.
About two of every three people who were diagnosed with cancer lived five years or more after diagnosis. Cancer survivors face many challenges because of their cancer diagnosis and treatment. They can help maintain their health and improve their quality of life by—
Learn more about cancer survivorship.
Publicado por salud equitativa en 4:15