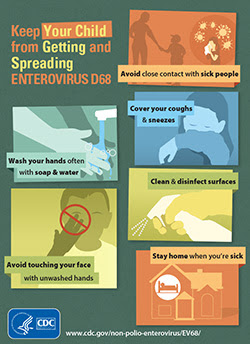 As of this writing, four deaths may or may not be linked to the spread of enterovirus 68, a respiratory infection, which has been diagnosed mostly among children in more than 40 U.S. states.The U.S. Centers for Disease Control and Prevention (CDC) confirmed 472 cases of enterovirus 68 in early October and noted the actual number of cases probably was higher.
In recent press conferences and news releases, the CDC reported it was unclear if the four patients died from or with enterovirus 68. Similarly, the CDC explained they were uncertain of the extent the current enterovirus 68 is linked to cases of muscle weakness or paralysis among some patients.
The CDC’s website explains the number of enterovirus 68 cases is unusual. The CDC notes enterovirus 68 is one of more than 100 non-polio enteroviruses that were first reported in California in 1962.
Since polio is a related virus, the CDC notes the poliolike symptoms of a few children recently under care is under scrutiny. As of this writing, enterovirus 68 has not been confirmed in the patients with poliolike symptoms.
The New York Times recently reported the initial cases of the current outbreak of enterovirus 68 were diagnosed at Children’s Mercy Hospital in Kansas City, MO. in August. The Times added the largest cluster of recent cases has occurred in the Kansas City metropolitian area. The CDC reports a recent cluster of 10 children with limb weakness in Colorado may or may not be linked to enterovirus 68.
The CDC explains enterovirus 68 spreads when an infected persons coughs, sneezes, or touches contaminated surfaces. The CDC notes the virus tends to spread during the summer and fall months and is likely to decline when colder weather arrives.
The CDC adds infants, children, and teens are more likely to become infected and ill. The CDC warns children with asthma are especially at risk.
The CDC notes the infection often causes fever, a cough, and other symptoms that resemble a bad cold.
The CDC tracks the course of the illness on a website that can be accessed by typing ‘cdc.gov/non-polio-enterovirus’ in most web browsers. While the website provides general information about non-polio enteroviruses, the section ‘States with lab-confirmed EV-D68 infection’ provides a state-by-state tracking of confirmed cases.
Two other, helpful gateways to information about enterovirus 68 are MedlinePlus.gov and healthmap.org.
MedlinePlus.gov provides information about enterovirus, including links to the CDC’s aforementioned information as well as a gateway to a well-written website (from the Nemours Foundation) that helps parents understand the virus’ symptoms and diagnosis. To find MedlinePlus.gov’s enterovirus information, type ‘enterovirus’  (e…n…t…e….r…o…v…i…r…u….s) within the search box on MedlinePlus.gov’s home page.
In addition, you can follow local information about enterovirus on healthmap.org by clicking on a U.S. map by-state. For example, links to current reporting about enterovirus 68 from local news organizations, as well as some relevant research citations recently were available by clicking on Colorado and Missouri.
Healthmap.org is a non-commercial, evidence-based website that covers disease and illness outbreaks across the U.S. and the globe. It also provides excellent information about the ebola outbreak. Healthmap.org is published by Boston Children’s Hospital and Harvard Medical School.
We will follow enterovirus 68 and update you if there are significant developments about the outbreak, or newly available, evidence-based resources.
Before I go, this reminder… MedlinePlus.gov is authoritative. It's free. We do not accept advertising …and is written to help you.
To find MedlinePlus.gov, just type in 'MedlinePlus.gov' in any web browser, such as Firefox, Safari, Netscape, Chrome or Explorer. To find Mobile MedlinePlus.gov, just type 'Mobile MedlinePlus' in the same web browsers.
We encourage you to use MedlinePlus and please recommend it to your friends. MedlinePlus is available in English and Spanish. Some medical information is available in 43 other languages.
Your comments about this or any of our podcasts are always welcome. We welcome suggestions about future topics too!
Please email Dr. Lindberg anytime at: NLMDirector@nlm.nih.gov
That's NLMDirector (one word) @nlm.nih.gov
A written transcript of recent podcasts is available by typing 'Director's comments' in the search box on MedlinePlus.gov's home page.
The National Library of Medicine is one of 27 institutes and centers within the National Institutes of Health. The National Institutes of Health is part of the U.S. Department of Health and Human Services.
A disclaimer — the information presented in this program should not replace the medical advice of your physician. You should not use this information to diagnose or treat any disease without first consulting with your physician or other health care provider.
It was nice to be with you. I look forward to meeting you here next week.
Publicado por salud equitativa en 8:29