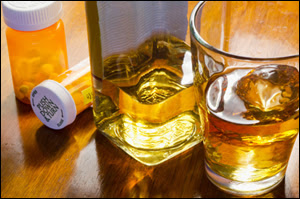 Alcohol was involved in 18.5% of emergency department visits for opioid drug abuse and 27.2% of visits for benzodiazepine abuse in 2010.

Alcohol was commonly involved in ED visits resulting from the abuse of OPRs or benzodiazepines as well as in deaths related to these drugs. Nearly one fifth of OPR abuse–related ED visits and more than one fourth of benzodiazepine abuse–related ED visits involved alcohol. Slightly more than one fifth of drug related deaths involved OPRs and alcohol and the same proportion applied to benzodiazepines and alcohol. Alcohol was more likely to be involved in single-drug class ED visits and deaths involving benzodiazepines compared with OPRs.
Alcohol involvement was higher in single-drug class ED visits for benzodiazepines compared with all ED visits involving benzodiazepines as well as single drug-class deaths for both OPRs and benzodiazepines compared with all deaths involving these drugs; this was especially pronounced for the benzodiazepine single-drug class deaths, for which 72.1% involved alcohol. This finding is consistent with the well characterized increase in central nervous system depression and overdose risk that results when alcohol is combined with these types of substances (5). It also indicates that benzodiazepines and weaker OPRs are less likely to cause such events without the additive effect of alcohol.
The percentage of alcohol involvement in ED visits for both OPRs and benzodiazepines was higher for men compared with women. Men report higher prevalence, frequency, and intensity of binge drinking compared with women, and this might have contributed to the higher percentage of alcohol involvement in ED visits among men seen in this study (3).
The results of the FDA and CDC analysis are consistent with previous reports. In West Virginia in 2006, 17.3% of unintentional pharmaceutical overdose deaths had alcohol as a contributing factor (7). In the National (Nationwide) Inpatient Sample, the largest publicly available all-payer inpatient health care database in the United States,† among persons aged 18–24 years, alcohol overdose was present in 20% of overdoses of opioids and related narcotics. Men had significantly higher rates: 25% compared with 15% for women, and were more likely to be hospitalized for overdoses combining opioids and alcohol. The nationwide study also found that the percentage of overdoses combining alcohol and drugs was higher among persons aged ≥25 years compared with those aged 18–24 years (8).
The findings in this report are subject to at least six limitations. First, the drugs (including alcohol) involved in ED visits and deaths might not all have been identified and documented. Second, distinguishing drugs taken for nonmedical and medical reasons is not always possible, especially when multiple drugs are involved. Third, DAWN ME does not rely on a statistical sampling of ME/Cs; findings cannot be considered representative of ME/Cs who did not participate, and results from the 13 states cannot be extrapolated to the entire United States. Fourth, state laws dictate which deaths are subject to ME/C review, and these laws vary by state. Fifth, toxicology testing practices vary depending on local concerns, funding, and testing technology, which affects the number of deaths determined to be DAWN ME cases and the number of deaths attributed to particular drugs. Finally, it was not possible to ascertain the amount of alcohol consumed, which limited the ability to look at outcomes by alcohol consumption level.
The fact that approximately one fifth of OPR drug abuse–related ED visits and drug-related deaths involve alcohol suggests the need for stronger prevention measures to mitigate this significant public health problem. OPRs and benzodiazepines are prescribed and dispensed by health care providers, and this presents an opportunity to discuss their risks, especially the serious risk of central nervous system depression when combined with alcohol or other depressants. However, only 16% of adults in the United States have discussed alcohol consumption with a health professional (9), and the percentage discussing other substance use is unknown. Interventions such as combined prevention programs that target alcohol and prescription drug abuse, systematic provider and patient education, and integration of screening and intervention services into the primary care health system to enable early identification of problematic alcohol and drug use might reduce the number of ED visits and deaths related to drug abuse and alcohol.
1Office of Public Health Strategy and Analysis, Office of the Commissioner, Food and Drug Administration; 2Division of Unintentional Injury Prevention, National Center for Injury Prevention and Control, CDC; 3Division of Analysis, Research, and Practice Integration, National Center for Injury Prevention and Control, CDC. (Corresponding author: Christopher M. Jones, christopher.m.jones@fda.hhs.gov, 301-796-4621)