About the NIH Director

Francis S. Collins, M.D., Ph.D., was officially sworn in on Monday, August 17, 2009 as the 16th director of the National Institutes of Health (NIH). Dr. Collins was nominated by President Barack Obama on July 8, and was unanimously confirmed by the U.S. Senate on August 7. 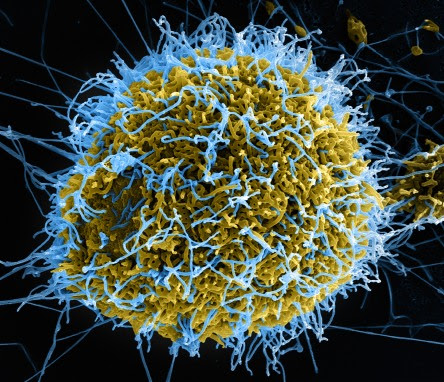 Caption: Colorized scanning electron micrograph of filamentous Ebola virus particles (blue) budding from a chronically infected VERO E6 cell (yellow-green).
Credit: National Institute of Allergy and Infectious Diseases, NIH
Long before the current outbreak of Ebola Virus Disease (EVD) began in West Africa, NIH-funded scientists had begun collaborating with labs in Sierra Leone and Nigeria to analyze the genomes and develop diagnostic tests for the virus that caused Lassa fever, a deadly hemorrhagic disease related to EVD. But when the outbreak struck in February 2014, an international team led by NIH Director’s New Innovator Awardee Pardis Sabeti quickly switched gears to focus on Ebola.
In a study just out in the journal Science [1], this fast-acting team reported that it has sequenced the complete genetic blueprints, or genomes, of 99 Ebola virus samples obtained from 78 patients in Sierra Leone. This new genomic data has revealed clues about the origin and evolution of the Ebola virus, as well as provided insights that may aid in the development of better diagnostics and inform efforts to devise effective therapies and vaccines.
To help advance such research, Sabeti’s team deposited its Ebola genome sequences, even prior to publication, in a database run by NIH’s National Center for Biotechnology Information’s (NCBI), which means the data is immediately and freely available to researchers around the world. Access to this genomic data should accelerate international efforts to figure out ways of detecting, treating, and, ultimately, preventing infection by this deadly virus.
Sophisticated genomic analyses by Sabeti and her colleagues show that the current Ebola Virus Disease outbreak most likely originated less than a year ago with a single person, starting at the funeral of a traditional healer in Guinea and eventually spreading to Sierra Leone and other nations. In contrast, previous EVD outbreaks appear to have been fueled primarily by humans being directly exposed to infected fruit bats or other animals harboring the virus. These findings underscore the need to take proper precautions, as outlined by the Centers for Disease Control and Prevention, to prevent the spread of the virus from human to human.
As for possible implications of this work for diagnosis and treatment, Sabeti’s team found that the Ebola virus strain (EBOV) responsible for the 2014 outbreak in West Africa appears to have evolved from a strain that caused an outbreak in Central Africa in 2004, with changes occurring in nearly 400 regions of the genome. These findings are important, because some of the tests currently used to diagnose EBOV might fail to work in the presence of these genetic changes—meaning they could give false negative test results in some people who are actually infected with the virus. Now, thanks to Sabeti’s genomic profiling of EBOV, it should be possible to enhance diagnostic tests to pick up nearly all forms of the virus. Continued genomic sequencing will be critical to keep the diagnostics up-to-date, because the Ebola virus will continue to evolve over the course of the outbreak.
Sabeti, who is a computational geneticist at the Broad Institute of Harvard and MIT in Cambridge, MA, says among the urgent questions still to be answered is whether these genetic changes might influence the speed at which the virus spreads or the severity of the disease it causes. 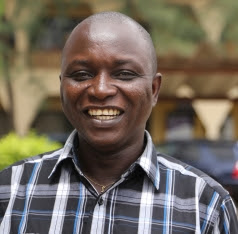 Caption: In Memory of Sheik Humarr Khan, who was part of the research team that sequenced the Ebola Virus genome. Dr. Khan died from Ebola Virus Disease while overseeing patient care at Kenema Government Hospital in Sierra Leone.
Credit: Pardis C. Sabeti
As of August 28, the Ebola virus outbreak in West Africa has infected at least 3,069 people and killed 1,552 [2], making it the largest outbreak on record since the disease was first identified in 1976. Sadly, among its victims were five members of Sabeti’s team who died before their paper was published, including Dr. Sheik Humarr Khan, a leading virologist in Sierra Leone.
So, let me close by paying tribute to these brave researchers—and all of the other dedicated scientists and healthcare workers on the front lines of the Ebola Virus Disease epidemic and other public health emergencies around the globe. You bring both comfort and hope to those who need it the most. From all of us here at NIH, let me convey our gratitude for your dedication.
References:
[1] Genomic surveillance elucidates Ebola virus origin and transmission during the 2014 outbreak. Gire SK, Sabeti PC, et al. Science (published online August 28, 2014)
[2] Ebola virus disease update—West Africa (WHO)
Links:
Sabeti Lab
Emerging Disease or Emerging Diagnosis? (NIH Common Fund Video Competition)
Understanding Ebola and Marburg hemorrhagic fevers (NIAID)
Ebola Hemorrhagic Fever, Prevention (CDC)
CDC: Stopping the Ebola Outbreak
NIH support: Common Fund, National Institute of Allergy and Infectious Diseases
Publicado por salud equitativa en 7:20