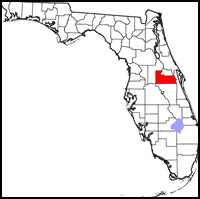 Orange County, Florida, was the location of a measles outbreak in four unvaccinated siblings aged 4–13 years,
and possibly associated with a fifth case in a visitor from Brazil.

Measles is an acute, highly infectious, viral disease spread via large respiratory droplets and aerosolized droplet nuclei. In the United States, interruption of year-round endemic transmission of measles was documented in 2000 (3). This occurred as a result of high population immunity, attained through vaccination, and rapid public health response to cases. However, infants aged <12 months and unvaccinated children and adults remain at risk for acquiring and transmitting measles. Despite a high number of potential exposures in school, child care, and health care settings, no transmission occurred, highlighting that high population immunity can limit measles transmission and maintain measles elimination in the United States.
Measles is currently endemic in much of the world, including Europe, where genotype D8 is circulating, which provides an ongoing source of imported cases to the United States (4–8). Despite a detailed investigation, no source of exposure was found for patients 1 and 5, who became febrile on December 25 and 26, respectively, and their presence at a theme park with domestic and international attendees was suggestive of a common exposure at this location. Large congregate settings might be an important potential source of measles exposure in the United States. This outbreak also highlights the importance of molecular epidemiology. The identical D8 sequences from patients 2–5 was suggestive of an epidemiologic linkage or common source of exposure, although two separate importations from areas where this lineage is circulating cannot be excluded as an explanation.
The misdiagnosis of patients 1 and 5 is a reminder that many health care providers are no longer familiar with the clinical presentation of measles and they need to maintain a high index of suspicion when a clinically compatible febrile rash illness occurs in an unvaccinated person. High vaccination coverage in the entire population and rapid, robust public health response to cases, which includes physicians immediately reporting suspected cases to public health agencies, appropriate isolation and specimen collection for both viral detection and genotyping as well as serologic testing, and thorough contact investigations, are necessary elements in the effort to maintain measles elimination in the United States.