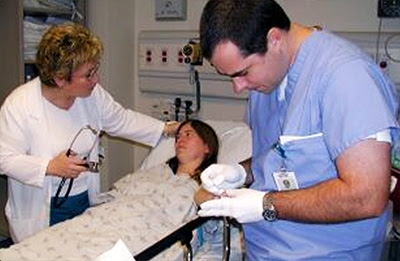 Emergency department staff evaluates a patient with fever who had traveled recently to a malaria-endemic country. Malaria should be considered a potential medical emergency and should be treated accordingly. Delay in diagnosis and treatment is a leading cause of death in malaria patients in the United States.
The Plasmodium parasite that causes malaria continuously evolves ways to counter anti-malarial drugs. Malaria control efforts based on the use of chloroquine faltered in the 1960s when drug-resistant Plasmodium falciparum parasites evolved. Other malaria drug regimens—such as sulfadoxine-pyrimethamine, and mefloquine—also failed in many regions due to emergence of resistance. Recently, resistance to current first-line treatments—known as artemisinin-based combination therapies—has emerged in Southeast Asia. A serious concern is the potential spread of these resistant parasites to other regions.
In addition to hampering malaria control efforts in countries where malaria is common, resistance complicates treatment of patients who have returned to the US after being infected overseas.
Molecular markers associated with resistance to anti-malarial drugs can help detect resistant parasites. CDC uses conventional molecular tools for characterizing molecular markers, but these are cumbersome, slow, and expensive. Highly sensitive, efficient, and integrated surveillance methods will improve identification of established and emerging drug-resistant strains and allow CDC to respond rapidly to changes needed in case management and control.
CDC is developing next generation sequencing methods to detect resistant parasites rapidly. These methods will allow CDC to detect even a small number of resistant parasites present. Early identification of low levels of resistant parasites will make it easier and faster to choose the right drugs for treatment than current practices allow.
Once the new advanced molecular detection methods are fully developed and integrated, they will replace the slower and less sensitive methods now in use.