Only 1 in 5 sexually experienced U.S. students ever tested for HIV 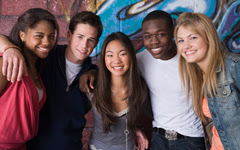 Only 22 percent of sexually experienced U.S. high school students have ever been tested for HIV, even though young people account for a disproportionate share of new infections, researchers for the Centers for Disease Control and Prevention will report at the 2014 International AIDS Conference.
Female and black students were more likely to be tested than male students and other racial/ethnic groups, but HIV testing among all groups of adolescents remains low, the CDC analysis found.
“This analysis offers a mixed progress report on sexual risk among U.S. high school students – we’ve seen substantial progress in some areas, but risk persists in others,” said Jonathan Mermin, M.D., director of CDC’s National Center for HIV/AIDS, Viral Hepatitis, STD, and Tuberculosis Prevention. “It is clear that HIV testing is not reaching everyone who needs it.”
The new analysis provides an in-depth look at trends in sexual risk behaviors among students by race and gender from 1991 to 2013, building upon data released last month on trends in sexual risk behaviors among all U.S. students. Data indicate that areas of progress in reducing sexual risk differ among various groups.
The proportion of black, Hispanic, and female students who have ever had sexual intercourse has declined throughout the 22-year time period, but progress has stalled in this area for white and male students.
Similarly, the analysis noted consistent declines in the proportion of black and Hispanic students who had multiple sexual partners, but found increases among white students since 2009. And following years of increases, condom use has now declined among sexually active female and black students, and stabilized among male, white, and Hispanic students, the researchers found.
“Protecting the health of America’s youth will require action not just from CDC, but also from parents, schools, health care providers, and communities,” Dr. Mermin said.
The new analysis will be presented on July 23 by Laura Kann, Ph.D., at the 20th International AIDS Conference in Melbourne, Australia. It is based on data from CDC’s National Youth Risk Behavior Survey (YRBS), a nationally representative survey, done every other year, of public and private school students in grades 9-12.
Key findings include:
Despite substantial progress in reducing sexual risk behaviors among black students, including decreases in the proportion of black students who have ever had sex, risk remains higher among these students than among their white and Hispanic counterparts.
“African-American youth have made tremendous strides in protecting themselves. However, they continue to shoulder a disproportionate burden of HIV and STD infections,” said Stephanie Zaza, M.D., M.P.H., director of CDC’s Division of Adolescent and School Health. “It’s important that we build on progress in reducing sexual risk behaviors among African-American students, while working to provide all young people with essential information, skills, and services to protect themselves from HIV and STDs.”
The YRBS does not measure some of the known social and economic determinants of risk behaviors, such as family income and education, so researchers cannot assess the degree to which these factors may account for the higher levels of risk behaviors among African-American youth in this study.
More information is available at www.cdc.gov/nchhstp/newsroom.
###
U.S. DEPARTMENT OF HEALTH AND HUMAN SERVICES