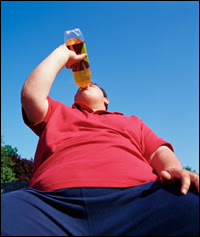 Daily consumption of sugar-sweetened beverages (SSB) has been associated with obesity, diabetes, and cardiovascular disease. This issue ofMMWR includes a report on SSB consumption in 18 states.

In 2012, about one in four adults reported consuming regular soda, fruit drinks, or both ≥1 times daily in the 18 states surveyed. The states with the highest prevalence of daily consumption of regular soda, fruit drinks, or both were Mississippi and Tennessee. Further, daily regular soda and fruit drink consumption was most common among those aged 18‒34 years, men, non-Hispanic blacks, and Hispanics. Reducing SSB consumption as part of a healthy lifestyle might help with weight management and reduce the risk for chronic diseases among U.S. adults. Persons who want to reduce their daily added sugar intake can consider replacing their consumption of SSB with healthier drinking options (e.g., water, unsweetened tea, and fat-free milk).
These data from respondents in the 18 states that administered the optional SSB module as part of BRFSS in 2012 indicated that 26.3% of U.S. adults drank regular soda, fruit drinks or both daily. In contrast, data from the National Health and Nutrition Examination Survey (NHANES) indicated that the prevalence of daily SSB consumption (including all types of SSB) during 2007‒2008 ranged from 50% for adults aged ≥35 years to 73% for adults aged 20‒34 years (3). Possible reasons for this discrepancy include the following: 1) NHANES used 24-hour dietary recall whereas BRFSS used 30-day recall; 2) other SSB types such as sports and energy drinks, which contribute about 4%–8% of total SSB intake on a given day (3), were counted by NHANES but not by BRFSS; 3) NHANES is an in-person survey whereas BRFSS is conducted by telephone; 4) NHANES response rates are generally higher than BRFSS response rates††; and 5) the NHANES data were collected 4‒5 years before the BRFSS data; regular soda and fruit drink consumption among adults aged ≥20 years has been decreasing nationally over the last decade (3,4).
The reasons for higher SSB consumption in certain states (e.g., Mississippi and Tennessee) are unclear. It could result from differences in the food environment and beverage marketing. For example, supermarkets in the southern region of the United States apportion more advertising space in sales circulars to SSB than do supermarkets in other regions, possibly increasing likelihood of SSB consumption (5). A previous study reported that the diet quality of adults in the lower Mississippi Delta, assessed by the Healthy Eating Index, was lower than other areas of the United States (6). This difference could be attributed to lower socioeconomic status, cultural factors, and food availability and accessibility in the area.
Somewhat similar to the present study, other researchers also have reported that younger adults (aged 20‒34 years), men, non-Hispanic blacks, and Hispanics are more likely to consume SSB daily (3,4) compared with others. Possible reasons why these groups consume SSB more often might include taste preference, family influence, eating outside of the home, greater exposure to SSB marketing,§§ availability and affordability of SSB in particular communities or neighborhoods, and limited knowledge of the caloric content of SSB and their potential contribution to obesity (7,8). For example, the proportion of adults who knew the approximate calorie content of a 24-ounce soda was lowest among non-Hispanic blacks (8). Another explanation for higher SSB consumption could be lower health literacy in some subpopulations, especially among men and blacks (9). Further research could help identify why these disparities exist and how they might be addressed.
The findings in this report are subject to at least five limitations. First, estimates of regular soda and fruit drink consumption were based on self-report, and respondents might not have accurately reported their consumption; therefore, estimates might be either underestimated or overestimated. Second, the consumption frequency of only two types of SSB (regular soda and fruit drinks) was assessed; other types of SSB (e.g., sports and energy drinks, sweetened tea, and coffee drinks) were not included. Third, though it was possible to estimate the prevalence of the frequency of intake as SSB consumption per day, it was not possible to determine the actual amount of SSB consumed. Therefore, the daily calories from SSB could not be determined. Fourth, response bias might have affected the results because survey response rates ranged from 27.6% to 60.4% among states. Finally, these analyses were limited to adults in the 18 states with SSB data available, which limits the generalizability of the findings to the entire U.S. adult population.
SSB such as regular soda and fruit drinks contain added sugars and are sources of calories but have few, if any, essential nutrients (3,4). Because of the potential adverse impact of SSB consumption on diet quality, obesity and other chronic health conditions (2), reducing SSB consumption as part of a healthy lifestyle might help with weight management and the reduction of chronic diseases among U.S. adults. These findings among 18 states suggest that certain segments of the U.S. adult population consume regular soda and fruit drinks more often than others. Persons who want to reduce added sugars in their diet can decrease their consumption of regular soda and fruit drinks, which are the leading sources of SSB (3,4). States and health departments can support persons in these efforts by developing educational campaigns to inform consumers about beverage options and by helping worksites and other community venues increase access to healthful beverages such as water (10).