Hello everyone. I am very glad to have found this site! It’s a great shame that there is never the chance to exchange experiences with other affected patients.

Written by Yara, published 20 days ago. 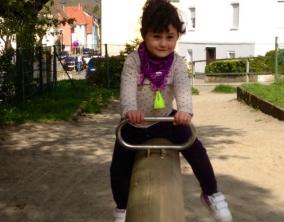 This is my - or rather - my daughter’s story. She will be 3 years old this September [Indian] has suffered from these episodes since she was three months old. Since then, they have arisen about every 2 weeks, with high fever. I took her to the paediatrician again and again, but once he told me that she had a respiratory infection, another time a tympanic cavity inflammation (for which she was completely pointlessly operated on at 5 months) and yet another time she apparently had a fever simply because she was teething. I believed the paediatrician at first, because I did not know any better.
Around the age of about 6 months, she began to have convulsions along with the episodes of fever. From then on, each episode was connected with a convulsion of this kind and we always ended up at the clinic. The doctors said that her febrile convulsions were triggered by the high fever, but still no-one was able to say why she had the fever. When she was 12 months old, we moved to another city and the final straw came at the clinic when they wanted to fob off me again with a “stomach intestine virus” and give her antibiotics for the 100th time. The head physician arrived and I explained that she had a fever with convulsions every 2 weeks and no-one was able to help us.
We were admitted to the clinic and for the first time, no antibiotics were prescribed, only something to bring down the fever. The next day, the head physician came into the room with two other doctors and told us that he suspected my daughter could have FMF. He then performed a genetic test and two weeks later, the results were returned: heterozygous carrier of a glutamic acid (GAG) -> glutamine (CAG) - /p.GIu148Gln-/E148Q-Substitution.
On one hand, it was a great relief to me that we finally knew what she had and that we could treat it (that was what I thought at the time). On the other hand, I was also very shocked - I did not know this illness and was also afraid of this. One week later, the paediatrician then started administering 0.5 mg of Colchicine per day. And what a miracle it was - for 8 weeks she had no fevers! But then came the setback: after those 8 weeks, things went back to how they had been before the Colchicine, with an episode of fever every 2 weeks. I was very disappointed at the time. The paediatrician increased the dosage to 1.0 mg of Colchicine per day, but she didn’t get better at all. Thus I went on the internet to find out information. There I discovered that the rheumatology department of the University Hospital in Tübingen cared for children with Mediterranean fever. On the very same day, I called them and we were able to arrange an emergency appointment in two weeks, otherwise we could have had to wait a long time for an appointment.

2 weeks later, we went to the rheumatism outpatient clinic of the University Hospital for the first time. I got along very well with the rheumatologists and I had also the feeling that my daughter and I were in good hands. They took blood samples and performed urine and kidney examinations.
The head physician of the rheumatism outpatient clinic wanted increase the Colchicine dosage to 1.5 mg per day. We went home again and I gave her 1.5 mg of Colchicine. However, two days later, she had bad diarrhea and also vomited several times throughout the day. I called the rheumatism outpatient clinic and we had to be admitted a week later. There, the Colchicine was reduced again to 1.0 mg because she would not have been able to tolerate it and it was not working. The rheumatologists suggested treatment with Anakinra.
The next day, we therefore started a dosage of 0.16 ml (15 mg) of Anakinra per day. She reacted well and the leukocytes in her blood fell sharply. The episodes of fever also spread out to every 4 weeks. However, this only lasted for a short time. The Anakinra dosage was increased to 25 mg per day and the Colchicine dosage was kept to only 0.5 mg per day. The episodes improved again, with as few as one every 8 weeks!
This was the greatest success we had achieved yet. However, she now also had the febrile convulsions along with the fever and for the first time, the EEG was able to measure the seizure activity in the brain. Since this could not be directly associated with Mediterranean fever and was not a side effect of the Anakinra, the doctors now began to suggest epilepsy. In November 2012, she was then also put on medication for this and the convulsions improved, however the episodes became more frequent again. In March 2013, Anakinra was increased to 30 mg but it improved nothing. Now she has an episode every 3-4 weeks lasting 4 days each. The only difference is that with Anakinra, the fever no longer rises over 38.5, but the pain is more acute. In particular, she has very pronounced chest pains as well as abdominal pain. From time to time, her right knee joint becomes swollen. She is not fully responsive during the episodes and she can no longer walk. I try to handle this with Novalgin but it is extremely difficult to control her episodes.
The rheumatologists want to increase the dosage of Anakinra to 30 mg per day by December 2013 and leave the Colchicine at 0.5 mg per day, then she is also given Ilaris (canacinumab) as an injection. We all hope so much that she will eventually be able to live a halfway normal life. All of our hope therefore rests in Ilaris…
However we recently suffered yet another setback as she can no longer have bowel movements on her own. She has severe pain and her intestines no longer function correctly. She can only have bowel movements with laxatives, otherwise it is impossible. At the moment we do not yet know if this has something to do with the FMF or is a side effect from a medication. But on 11.07 we have the next appointment at the University Hospital, then we will see…
I would be very glad to hear from other affected FMF patients and also the parents of children suffering from FMF!
Written by Yara, published 20 days ago.
Publicado por salud equitativa en 4:29