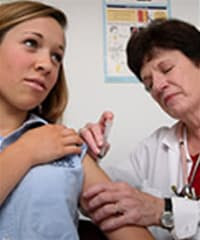 About 15% of meningococcal disease survivors will have long-term disabilities, such as loss of limb(s), deafness, nervous system problems, or brain damage.

Symptoms of meningococcal disease are usually sudden onset of fever, headache, and stiff neck. It can start with symptoms similar to influenza (flu), and will often also cause nausea, vomiting, sensitivity to light, rash, and confusion. Even with antibiotic treatment, people die in about 10-15% of cases. About 15% of survivors will have long-term disabilities, such as loss of limb(s), deafness, nervous system problems, or brain damage.

The good news is that there's a vaccine to help prevent meningococcal disease and it can prevent two of the three most common disease-causing strains. The vaccine is routinely recommended for all 11 through 18 year olds. Kids should get the first dose of this vaccine, known as the meningococcal conjugate vaccine (MCV4), at their 11-12 year old check-up. Now, teenagers are recommended to get a booster dose at age 16. If your teenager missed getting the vaccine at his/her check-up, ask the doctor about getting it now…especially if your child is heading off to college to live in a dorm.
CDC created a video to help you learn more about meningococcal disease and how to prevent it. This video features a CDC doctor who is a mom and an expert in meningitis. You can download the video or podcast at CDC-TV or access it on your mobile phone.

Your preteen or adolescent is at risk for other diseases like pertussis (whooping cough) and HPV that can be prevented with vaccines. If your child hasn't had a check-up within the last year, make an appointment now and ask your child's doctor what vaccines are recommended.