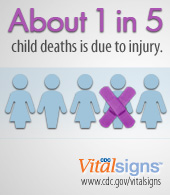 Injury is the #1 killer of children and teens in the United States. In 2009, more than 9,000 youth age 0-19 died from unintentional injuries in the United States. Millions more children suffer injuries requiring treatment in the emergency department. Leading causes of child injury include motor vehicle crashes, suffocation, drowning, poisoning, fires, and falls (1). Child injury is predictable and preventable. It is also among the most under-recognized public health problems facing our country today.
Progress has been made in preventing child injury. Child injury death rates have decreased 29% in the last decade (2). Yet injury is still the leading cause of death for children and teens. More can be done to keep our children safe.

The Centers for Disease Control and Prevention (CDC) is committed to preventing child injury by supporting solutions that will save lives and help children live to their fullest potential. The National Action Plan for Child Injury Prevention was developed by CDC and more than 60 stakeholders to spark action across the nation. The National Action Plan’s overall goals are to:

Methods: CDC analyzed 2000–2009 mortality data from the National Vital Statistics System by age group, sex, race/ethnicity, injury mechanism, and state.
Results: From 2000 to 2009, the overall annual unintentional injury death rate decreased 29%, from 15.5 to 11.0 per 100,000 population, accounting for 9,143 deaths in 2009. The rate decreased among all age groups except newborns and infants aged <1 year; in this age group, rates increased from 23.1 to 27.7 per 100,000 primarily as a result of an increase in reported suffocations. The poisoning death rate among teens aged 15–19 years nearly doubled, from 1.7 to 3.3 per 100,000, in part because of an increase in prescription drug overdoses (e.g., opioid pain relievers). Childhood motor vehicle traffic–related death rates declined 41%; however, these deaths remain the leading cause of unintentional injury death. Among states, unintentional injury death rates varied widely, from 4.0 to 25.1 per 100,000 in 2009.
Conclusions and Implications for Public Health Practice: Although the annual rate is declining, unintentional injury remains the leading cause of death among children and adolescents in the United States, led by motor vehicle traffic–related deaths. Death rates from infant suffocation and teen poisoning are increasing. The 2012 National Action Plan for Child Injury Prevention provides actions in surveillance, research, communication, education, health care, and public policy to guide efforts in saving lives by reducing injuries.
full-text:
Vital Signs: Unintentional Injury Deaths Among Persons Aged 0–19 Years — United States, 2000–2009