The rise of the 'narciss-ome' 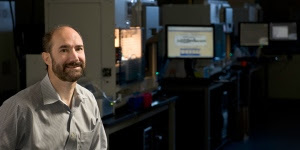 Michael Snyder observed the onset of his type 2 diabetes while following a range of physiological variables.
S. Fisch

The future of personalized genomic medicine can be glimpsed today in a paper that reports the integration of lead author Michael Snyder's genomic sequence with other ‘omics’ to give a read-out on his predisposition to disease, and his body’s response to viral infections and the onset of type 2 diabetes1.
As a proof-of-principle example of personalized genomic medicine, it is distinct from other studies because it applies whole-genome diagnostics to a healthy person rather than to individuals with disease.
Snyder, a geneticist at Stanford University School of Medicine in California, joins the swelling ranks of researchers who have publicly aired their own genome sequence. Some scientists question whether the latest work has much to add to the field. Richard Gibbs of Baylor College of Medicine in Houston, Texas, has humorously dubbed it “the narciss-ome”.


The power of one

"A criticism of this paper is that it’s anecdotally about one person, but that’s also its strength,” says geneticist George Church of Harvard Medical School in Boston, Massachusetts. Large-scale association studies trying to tease out the genetic variants of complex disease often make the mistake of trying to achieve statistical significance by “lumping together an enormous number of people that don’t necessarily belong together”, says Church.
Snyder’s ‘integrative personal omics profile’ — dubbed iPOP — was created by merging his genomic sequence with RNA, protein, metabolic and auto-antibody profiles taken 20 times over a 14-month period. The results revealed Snyder to be genetically predisposed to type 2 diabetes, despite his having no family history or other risk factors. During the study, his blood glucose levels escalated following the second of two viral infections, and he was subsequently diagnosed with the disease. Snyder has since made drastic dietary and lifestyle changes to manage his blood sugar levels.

Snyder and his colleagues followed the changes in real time and report the activation of molecular pathways not previously implicated in viral infection or the onset of type 2 diabetes. By doing longitudinal studies of many more individuals as they transition through healthy and disease states, Snyder thinks it will be possible to uncover new mechanisms involved in disease and the body’s immune and stress responses.
Church agrees. “We need more practise looking at individuals. Medicine treats people as individuals and we should be conducting research with a similar attitude.” In 2006, Church initiated the Personal Genome Project to sequence the genomes of 100,000 volunteers — including his own, which was one of the first ten to be analysed.
Snyder thinks it is “ridiculous” that standard medical evaluations, or 'work-ups', examine only a few dozen biomedical markers when current technology can generate a multitude more — his paper reports more than 3 billion measurements of molecular components. However, interpreting such a vast amount of data for multiple individuals would cause a bottleneck. To this end, Snyder was one of the founders who last August launched Personalis, a company based in Palo Alto, California, with the aim of interpreting genomes for research groups.

“I envisage that, as a part of any medical work-up, individuals will get their genome sequence not just once but multiple times,” says James Lupski of Baylor College of Medicine. ”Because your genome is changing — for instance, when it gets cancer, goes into remission and relapses.”
Like Church and Snyder, Lupski has had his genome sequenced, in his case in a quest to pinpoint the mutation underlying his Charcot–Marie–Tooth neuropathy2.
Studying one’s genome isn’t without ramifications, however. In Snyder’s case, on notifying his life-insurance company that he has type 2 diabetes, his premiums became “prohibitively expensive”. However, he says the trade-off was worth it. He feels genomics “saved his life” because he found out about the diabetes early and was able to make lifestyle changes, sparing himself some of the potential damage. “And I've been getting lots of free medical advice at conferences since I’ve been presenting my data,” he adds.